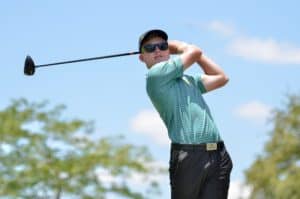 3 February 2020 – Ekurhuleni junior Ryan van Velzen started the African Amateur Stroke Play Championship on Monday like a house on fire as he carded a superlative eight-under-par 64 around Leopard Creek Country Club, giving him a three-stroke edge over his nearest competitor.

Starting on the 10th, Van Velzen birdied his first two holes, made two more on the 13th and 14th, before rounding out a dream opening nine with an eagle on the 18th with its notorious island green, which has seen many a dream round doused in the water.

“The eagle was quite cool, because my playing partner hit it to a foot, and I boxed a 20-footer for eagle straight after him,” he said. “It’s quite a short par-five, but you have to hit it in the fairway, or else you can’t go for it. I was lucky enough to hit in the fairway.”

Although he bogeyed his next hole, the 18-year-old Benoni Country Club member came back immediately with a birdie on the second before two more on six and eight saw him home three shots clear of fellow GolfRSA National Squad member Christo Lamprecht.

Sweden’s Algot Kleen – Van Velzen’s playing partner who hit it to within a foot on 18 – also eagled the par five on his way to five-under-par 67 and second place after the first day’s play.

A group of five players were in fifth at two under: Gustav Andersson of Sweden, South Africa’s Martin Vorster and the English duo of Robin Williams and Haider Hussain.

“I’m really happy with my round,” said Van Velzen. “I hit it really well all day and I putted well. I made lots of putts, especially in the beginning of the round. The key to this course is keeping it on the short stuff. You can’t really spin it out of the rough, but if you’re in the fairway you can go at some flags.”

Lamprecht – fourth in 2017 and the runner-up in 2018 – also had just a single bogey on his card for his 67, which came on the short par-four fourth. Three birdies came on the back nine after he also started on the 10th, and three more on two, six and eight completed his scoring.

Kleen’s round was more of a struggle, with three bogeys, an eagle and five birdies dotting his card.

Duminy got it to four-under after starting with three bogeys in his first five holes, but the 2019 Nomads SA Boys U-17 champion quickly regained those lost strokes with three birdies in the four remaining holes to turn level par. He made four more in the next six holes before giving one of the gains back with a bogey on the tough par-three seventh.

“I knew I had two par-fives ahead of me after that start,” said the 17-year-old Louis Oosthuizen Junior Golf Academy member.

“I knew if I could birdie those and just one more, I could start the second nine level. If I could have a good back nine, I could see what happens. It got going on the 15th when I hit a good approach with a three-wood to 40 feet and two-putted, and it got going from there.”

For the leader, it’s about riding his momentum. “I didn’t play too well in the practice round but I found something out there today so I hope I can keep it going tomorrow,” said Van Velzen.

Thanks to his pace-setting opening round, the new GolfRSA cap also laid a solid foundation for Team South Africa Juniors, who tied Sweden for the first round lead in the 54-hole Team Competition.

Van Velzen, Duminy and Christiaan Maas (77) combined for a total of six-under 210, which was matched by Kleen, Gustav Andersson (70) and Adam Wallin (72) for Team Sweden.

Written by Mike Green and released by Lali Stander on behalf of GolfRSA.