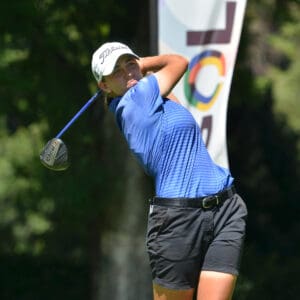 10 September 2021 – All eyes will be on Isabella van Rooyen as she hopes to continue her purple patch with a winning performance in the 2021 Nomads SA Girls Championship at Magalies Park Country Club this weekend.

The GolfRSA B-Squad member has been in devastating form since her first national triumph in April.

Resisting the pressure from the chasing pack with a mature and consistent final round performance at Durbanville Golf Club, the 18-year-old closed out a two-shot victory in the Nomads SA Girls Rose Bowl Championship.

Following back-to-back runner-up finishes in the KwaZulu-Natal Championship and Western Province Women’s Amateur, Van Rooyen backed up her rising star status at Kingswood Estate in May. The Clovelly golfer fired rounds of 69, 74, 70 and 71 in testing conditions to lift the Individual Competition title in the WGSA 72-Hole Team Championship, while partnering team-mates Kaylah Williams and Bobbi Brown to victory in the Swiss Team Trophy, ending an 18-year winning drought for Western Province in this prestigious national team event.

In August, Van Rooyen won the Southern Cape Open by two shots at Mossel Bay Golf Club and last weekend, she hit her stride at Kimberley Golf Club to lift the Northern Cape Open title with an eight-shot winning margin.

“This weekend will be a high-pressure event, because the Nomads SA Girls title is the SA Women’s Amateur equivalent of junior golf,” Van Rooyen said,

“I am feeling positive, and my game is in really good shape, but it’s a new week – new greens, different weather and lots of players with the potential to win. I think this year’s championship is wide open and the player who keeps it in play on this course and brings a hot putter will take the crown.”

Whateley – who starred for South Africa alongside Streicher in the 2019 ATI Ciputra Golfpreneur Junior World 2019 in Indonesia – ascended to the top spot in the Open Amateur rankings following seven successive top-10 finishes since March, while Streicher – playing a limited schedule due to matric commitments – has kept her form going with a string of top three performances in the local Boland Ladies Golf tournaments.

The top ranked trio could have a tough job, though staving off the likes of 16-year-old Kiera Floyd, and 15-year-olds Kyra van Kan and Stephanie Barbaglia.

Floyd came through a tough patch mid-season to make a welcome return to the winner’s circle in the Gauteng North Open in August. The GolfRSA Junior Protea Floyd lost by one stroke in 2019 – the last time this event was played – and no doubt, will be hungry to take the title this year.

2020 SA Women’s Amateur finalist Van Kan, another top Ekurhuleni talent, won the Pro Shop Gauteng Open in May, while Barbaglia won the Girls Competition when she finished joint 15th overall at the recent Friends of Engelberg, hosted by Anna, at Devonvale Golf and Wine Estate.

President Sarah Braude said Womens Golf South Africa is delighted that the event could go ahead this year, despite some challenges.

“The lockdown definitely forced us to think out of box, but we found solutions and we are so excited to be here at Magalies Park this week with a field of 83 juniors,” Braude said.

“We are playing the event in a bio-secure bubble in accordance with our GolfRSA risk mitigation protocols. To ensure that the girls miss at little school as possible, especially our matriculants, we are playing 54-holes over two days. With eight of the top 10 ranked juniors contesting the Championship Division, it is bound to come down to another nail-biting finish.

”Thanks to the tremendous financial support from The Nomads Golf Club of South Africa, we are able to bring our young rising talents from all across South Africa to Magalies Park and we are thrilled to give them an opportunity to gain valuable experience at a top tier national and World Amateur Golf Ranked championship.

“We have 26 juniors under 15 in this year’s championship, including seven 11-year-olds, and we look forward to watching how they handle themselves on the big stage this weekend.

“The Nomads SA Girls Championship is always a fabulous event where we are treated to great golf from our top players and we get to watch the emerging talent in action and we are looking forward to another fantastic edition of this prestigious national championship.”