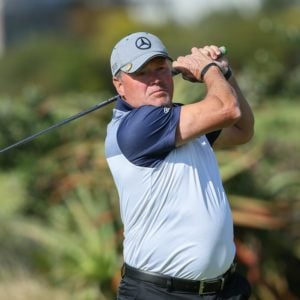 18 October 2017 – Andre van Dyk from Langebaan set the first round pace in the South African Senior Amateur Championship in Hermanus, but the Langebaan golfer will have to hold off a strong chasing pack if he hopes to lift the title on Friday.

Van Dyk rose to prominence when he lifted the prestigious Players Championship title and a fistful of top five finishes this season earned him his first cap for South Africa. He made his debut on the senior team in the Fellowship Cup test against India at Leopard Creek in August.

The 52-year-old made the most of the ideal playing conditions in the morning at Hermanus Golf Club to reverse a bogey start with a birdie at the second. He cancelled drops at six and 17 with further gains at five, 12 and 13 for a one-under-par 71.

However, Van Dyk has a target on his back as Graeme Watson, Tony Bailey, Conrad Rauch and Ferdi van der Merwe moved within striking distance at even-par.

Bailey from Western Province was the first player to move into Van Dyk’s rear-view mirror. The Bellville senior racked up a trio of birdies on the front nine to turn three under, but spoiled his strong run for the lead with a quartet of bogeys on the homeward stretch.

Watson from Ekurhuleni is making his debut in the senior circuit’s flagship event.

The former SA Mid-Amateur champion birdied the second, but bogeys at three, six and 10 pegged him back. He shortened the deficit on the leader with a birdie at 15 and a solid four at the par five 17th moved the Ebotse golfer within one of the lead.

Van der Merwe van Boland mixed three birdies with three bogeys for his 72. Rouch was two off the pace with three to play, but joined the chasing pack with a birdie at 17.

Denis Jones from Border became the oldest SA Mid-Amateur winner when he went wire-to-wire at his home course at the age of 60 in 2011.

The East London golfer surged into the mix with birdies at 15, 16 and 17 to tie for sixth with three-time former champion Jock Wellington from Central Gauteng at one over par.

Francois le Roux – looking to capitalise on the form that carried him to the winner’s circle three times this season – was one of the firm favourites starting the championship, but the Boland got the brunt of the wind that showed up in the afternoon.