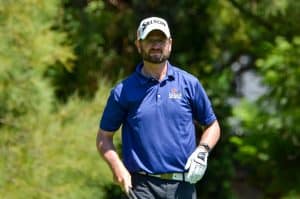 29 April 2021 – Wingate Park’s Christopher van der Merwe made the most of an early tee time on Wednesday to post the low round of the day to lead the first round of the weather-interrupted SA Mid-Amateur Championship.

Making a great start in his national mid-amateur debut at Devonvale Golf and Wine Estate, the Gauteng North golfer posted a four-under-par 68 to lead by one shot over No 1 ranked Jacques van Tonder and 2017 runner-up Ryan Dreyer.

The Mid-Amateur section of the game caters for amateurs over the age of 30 and has in the last few years evolved into one of the most competitive sections in the game, particularly at the elite level.

After the start of the tournament was delayed by two hours due to heavy mist, the Cape South-Easter grew in strength throughout the day, giving the players plenty of trouble on the relatively short winelands layout.

Van der Merwe, a former professional who played one season on the Sunshine Tour in 2020, was one the early starters and took advantage of the conditions to post four birdies and an eagle for a round of 68 that caught him a little by surprise.

“I fell and hurt my right hand two weeks ago and so I wasn’t sure how I was going to play,” he explained. “But fortunately it’s not too painful when I play.

“The course is in excellent condition but the greens and the wind made conditions difficult. I’m from Pretoria so I’m not used to playing in the wind, but fortunately I had a good caddie who helped me with the lines off the tee and on the greens and on the back nine it all came together nicely.”

With only six players finishing under par, the 5 962-metre course is baring its teeth and none of the field of 94 managed to keep a bogey off their cards.

“I’ll guess the goal is to keep trying to shoot under par,” said Van der Merwe. “To do that I will need to make sure I keep it on the narrow fairways and hit the greens. Hopefully I’ll make a few putts along the way.”

Van Tonder and Dreyer each offset five birdies with two bogeys to finish at three-under, while Westlake’s Elton James posted a round of two-under-par 70.

Pietie Loubser of Westlake and Steven Ferreira of Reading Country Club were the two remaining players to finish in red numbers, with rounds of 71.

The players who couldn’t finish on day one due to failing light, returned on Thursday morning to complete their rounds before the second got underway.