van der Merwe leads after the first round

It was a memorable day for Graham van der Merwe, the eighteen year old amateur for Royal Johannesburg and Kensington Golf Club. He finished on top of the leader board after the first round of the 72 hole South African Amateur Stroke Play Championship, with a three under par 69.

“The ball struck the flag and from where I was standing I could not see a thing,” said the clearly elated Central Gauteng golfer. “It was only when a spectator told me it was in the hole that I realised for the first time what I had done!”

Although the light breeze varied through the day, conditions were good. However the rough, on the Jack Nicklaus designed Pearl Valley Golf Estates layout, just outside Paarl, is testing with the scores to prove.

Only nine players broke par, of a field of one hundred and forty four players.

One shot adrift of the surprise first round leader are five players. They are Bevan Macdonald, Breyten Meyer, Le Riche Ehlers, Brandon Stone and Bryn Flanagan. 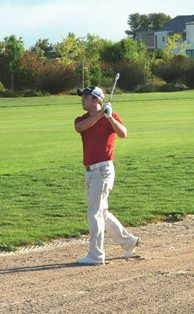 Local favourite Aaron Russell also had it going this afternoon, getting to three under par at the eleventh hole. However he dropped three shots coming in, one on hole 12, 16 and 18. “The wind was testing today,” said the Russell, after his round. The Westlake Golf Club member, from Cape Town, said that he hit his two iron or three wood off most of the tees just to ensure that he ended up on the fairway. He finished level par and in touch with the leaders.

Pre-tournament favourite Ryan Dreyer struggled to a three over par 75. He will be looking to a good second round score to move up the leader board and into contention for the final rounds. The defending champion JG Claassen (74) will be in the same mode.

Tomorrow the second round of championship will be played. On conclusion of this round there will be a cut to the 65th placed player and ties. All players making the cut will contest the final two rounds to be played on Thursday and Friday this week.