van der Merwe bags an albatross and the lead

Unheralded Graham van der Merwe hit one of his best drives of the day followed by a sweet six iron, covering one hundred and ninety odd metres, into the hole on the par five fifth for a rare albatross, three under par on a par five. This spurred him on to a pace setting round of 69, three under par, in this morning’s first round of the 72 hole South African Amateur Stroke Play Championship being played at Pearl Valley Golf Estates, near Paarl in the Western Cape.

The eighteen year old amateur from Royal Johannesburg Golf Club, who is playing in his first South African Amateur Stroke Play Championship, went out in 37, having started on the 10th hole. Enjoying the benign but hot weather conditions, in which the smoke from fires on surrounding mountains provided the biggest climatic challenge, he came back in 32, which included his memorable feat on hole 5 (his 15th hole), two birdies and a bogey.

“The ball struck the flag and from where I was standing I could not see a thing,” said the clearly elated Central Gauteng golfer. “It was only when a spectator told me it was in the hole that I realised for the first time I had an albatross!”

Van der Merwe is followed by two players, Bevan Macdonald and Breyten Meyer one shot back. 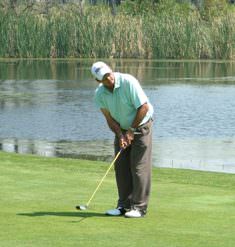 Pre-tournament favourite Ryan Dreyer and defending champion JG Claassen recorded rounds of 75, three over par, and 74, two over par, respectively. Both players recorded triple bogeys in their rounds, Claassen did this at the par four sixteenth hole while Dreyer struggled through the final hole recording eight shots on the par five.

The afternoon field is still to conclude their rounds.

Tomorrow the second round of championship will be played. On conclusion of this round there will be a cut to the 65th placed player and ties. All players making the cut will contest the final two rounds to be played on Thursday and Friday this week.