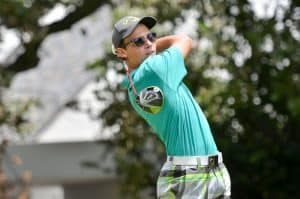 Ryan van der Klis fired a six-under-par 66 to lead the first round of the Nomads National Order of Merit at Bryanston Country Club; credit Ernest Blignault.

9 July 2018 – Ryan van der Klis set the pace on the opening day of the Nomads National Order of Merit, making the most of the sunny conditions to fire an eagle and six for an impressive six-under 66 at Bryanston Country Club on Monday.

Van der Klis went off the 10th and was one-under after a birdie at 11. He dropped a shot at 12, but stuck a lob-wedge close at 13 and made the putt to get back into red numbers.

“I hit a great drive down the middle at 15, hit a four-iron just short, but it released and rolled up about three metres short of the pin on the back of the green,” said the Heron Ridge College matriculant.

“I laid up at 16 and hit a 7-iron well left on the green, but I holed the 60-foot putt for birdie. Made pars at 17 and 18 to turn four-under and within one shot of Christiaan’s clubhouse target.”

The Kyalami golfer birdied the par five second, but gave the advantage back at the third hole.

“I hit my tee shot into the trees right and had to punch out, and I ended up two-putting for bogey,” he said. “But the ninth was playing quite short and I took advantage for a finishing birdie.

“It was 148 metres to the pin and I stuck a 9-iron on the slope behind the pin and drained a slippery right-to-left putt for birdie from about five metres. Being in matric means golf has to go on the back burner, so it’s really nice to come out and to be in contention.”
Martin Vorster and Samuel Simpson – in the mix at the Dimension Data Junior Open in George a fortnight ago and in contention at the Nomads SA Boys Under-17 Championship last week – are in the running again.

Simpson overcame a double bogey start with five birdies to turn three under. Further gains on his front nine helped the Western Province golfer to tie share of third on four-under with Vorster, De Klerk from Ekurhuleni and Boland’s Daniel Cronje.

South African Golf Development Board star Cole Stevens chased Casey Jarvis all the way to the finish line in the SA Boys U-17 at Middelburg Country Club on Friday. The Parkview golfer is also back in the mix after and opening 69 earned Stevens a share of seventh with fellow Gauteng junior Shaun Jones.

The pair finished one shot clear of Ryan van Velzen from Ekurhuleni, Western Province’s Tristan Galant and Eben Spangenberg from Southern Cape and two shots ahead of Bridge Fund Managers Junior Series finalist Nikhil Gopal. The KwaZulu-Natal golfer, who competed in the 40th Junior North and South in the United States last week, tied for 12th with a one-under-par 71.

Nikhil Rama celebrated his ace in as many weeks when he holed out from 186 metres with a 6-iron at the par three fourth hole of his home course.