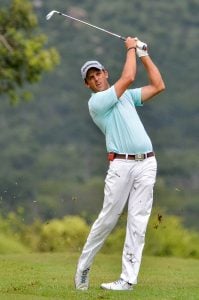 University Sport South Africa stole the march on Gauteng North on day two of the SA Challenge Cup at Atlantic Beach Golf Club, while Western Province edged out Central Gauteng and GolfRSA Juniors strengthened their position at the top of the log on Tuesday.

USSA lost the opening Foursomes game to the defending champions, but three successive wins took them into the Singles with a tidy 3 – 1 lead.

Clifford Thompson scored first blood for Gauteng North when he mowed down fourth year honours student David Nortje from the University of Pretoria 5 & 4, but Clayton Mansfield from Varsity College hit back for USSA and knocked out Nicholas Frade 4 & 3.

Kifentse Nukeri, Otto van Buynder and Etienne Janse van Rensburg all won 1-up against Nelson Mandela Metropolitan University trio Hando Brophy, Michael Mayberry and Kyle de Beer to give the Daisies a glimmer of hope, but Andrew Plint from the University of Pretoria sealed the deal for USSA when he took down Francois Pretorius 1-up.

The 7 – 5 victory launched USSA from the bottom of the log to a tie for third with Central Gauteng.

Western Province won two Foursomes games, lost to Ruan Botha and Andrew Carlsson but halved against James Pennington and Eric Wowor from Central Gaueng to carry a one point lead into the Singles.

In the final match, the Presidents Team held their own against the GolfRSA Juniors in the Foursomes and the two teams headed into the Singles at 2 – all. However, Alex van Wyk set the tone for 7.5 – 4.5 victory for the juniors when he whipped Neswill Croy 6 & 5.

Reece Haikney, Martin Vorster, Jayden Schaper and Slade Pickering reeled in four points to take the team to seven points. Bradley de Beer was 1-up against Cole Stevens playing the last hole, but the Presidents Team rookie birdied 18 to halve the game.

Karabo Mokoena and Siyanda Mwandla secured the two points for the Presidents Team.

A second successive win kept the GolfRSA Juniors in the driver’s seat at the top of the log, but with four points and 14.5 games points, the two-time champions only have half a games point advantage over Western Province.