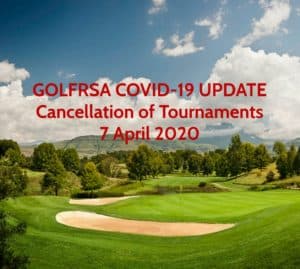 Further to the Memorandum issued by the South African Golf Association (SAGA) and Womens Golf South Africa (WGSA) on 16 March 2020 regarding the cancellation of tournaments, we are implementing the following amendments and additions to that advisory:

2. All cancelled events are “CANCELLED” and will NOT be rescheduled.

3. Though not advisable, should Unions reschedule cancelled tournaments, no SAGA National Order of Merit (OoM) points or WGSA Ranking Points will be allocated.

4. Tournaments beyond 30 June 2020 will be considered for continuation or cancellation on a rolling basis at least 60 days prior to individual events and 90 days prior to team events with due consideration of the prevailing situation around the Corona Virus National Disaster at that time. By implication, the cut-off date for a decision on the SAGA Open Amateur IPT is thus 15 June 2020 and the WGSA Inter-Provincial is 20 June 2020.

5. The allocation of SAGA OoM and WGSA Ranking Points have been “frozen” from the time of the first tournament cancellation (16th March 2020) and those tournaments will not be removed from the SAGA OoM or the WGSA Ranking until after the return to “normal”.

6. After the return to “normal”, tournaments played will replace the same tournament of 12 months prior. This means that tournaments NOT played during the current period would be reflected for a period of no less than 12 months prior to being replaced.

7. The national selection policies will be adapted accordingly to allow for the disruption to the SAGA OoM and the WGSA Ranking Points until 12 (twelve) months after the resumption of tournaments.

SAGA and WGSA highly recommend that Unions also revise their own selection policies to accommodate the potential selection of Provincial Teams due to a very few events having been played in the time leading up to the teams’ tournaments.

We encourage our members to continue the safe behaviours and protocols in the continued fight to turn the Covid-19 pandemic around.