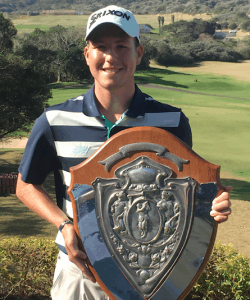 6 August 2018 – The GolfRSA National Squad celebrated a noteworthy slice of success with the international achievements of Jovan Rebula, Wilco Nienaber, Christo Lamprecht, Martin Vorster and Deon Germishuys between May and July this year.

These world beaters undoubtedly deserved the attention showered on them, but it’s time to shine the spotlight on Therion Nel, the unsung hero of the squad’s annual tour to Great Britain and Ireland.

The 20-year-old Free State golfer was the only member of the squad to finish the eight-week long tour four-for-four in starts and cuts and illustrated just why he is considered as one of South Africa’s brightest golfing prospects.

“I never thought I’d do as well as I did,” said Nel, who exudes the quiet intensity of a Retief Goosen and the boyish enthusiasm of a Louis Oosthuizen.

“It was my first time competing in Europe and my first taste of true links golf. I hadn’t played well in the build-up to the tour, so I kept my expectations low. Practice rounds and playing courses like Ardglass, Carton House, the European Club and Royal Dublin between tournaments definitely helped me to learn how to manage myself out there.”

His penchant for understatement is almost as accomplished as his golf at the moment.

Nel tied for 13th in the Irish Amateur and finished 12th overall East of Ireland Amateur. Under the gun to make the top 40 in the St Andrews Links, he eagled the intimidating 18th hole at the Old Course to extend his stay at The Home of Golf.

He comfortably qualified for the match play stage of The Amateur Championship alongside Rebula, Nienaber, Matt Saulez, Malcolm Mitchell and fellow Ernie Els and Fancourt Foundation member Luca Filippi at Royal Aberdeen and reached the third round, where he bowed out to Filippi.

In March, Nel won the Northern Cape Open and back on home soil after the tour, the Ernie Els and Fancourt Foundation member extended his silverware haul with commanding victories in the Limpopo Open and Border Amateur Stroke Play Championships.

“The last three months have been quite unreal,” said Nel with quiet self-assurance.

“The aim of the tour was for us to play outside our comfort zone, to build experience and to test ourselves against top competition. The tour certainly lived up to its billing and we all benefitted from the experience. I built confidence with every shot I played abroad and every cut I made was a shot in the arm. I came home trusting that I can compete with the best in the world, not just with my golf game, but with a much stronger mental game.

“In the Irish Amateur I shot 71 in the opening round at Royal County Down. Then I started the second round with a nine on the first hole, a par five. I fought for the next 17 holes and made the cut with an 80. That was a huge mental victory for me.

“But we all learned that we are good enough to compete against the best in the world and The Amateur drove it home. There were 10 of us in a field of 288 guys playing for 64 spots in the qualifier. Five us of made it and a couple of guys missed out with just a shot or two. Only three of the 23 Americans in the field qualified.”

Nel broke onto the golfing radar in 2017 when he rose to 11th in the Open Amateur Rankings.

“Unfortunately my goal to break into the top 10 early in 2018 took a big knock when I was benched at the end of the 2017 season,” said the demure Nel in his unhurried, unassuming manner.

“I could barely walk when I came home from the Harry Oppenheimer Trophy. My feet were incredibly sore. At first I thought it was just from playing too much golf and my dad maybe it was gout. When the pain became unbearable, I had a scan and they diagnosed stress fractures in both feet. The left foot was the worst, and I had to wear a moon boot for eight weeks.”

Nel got the go-ahead to tee it up in the Sanlam SA Amateur at the end of February, but the inclines and valleys at Durban Country Club took its toll.

“It was a real struggle, but I was so pleased when I made the match play,” he said. “In retrospect, it was a blessing thing that I got cut in the first round. I was forced to make a slow start and build up to the UK Tour.”

Having moved to sixth in the Open Amateur Rankings, South Africa’s quiet achiever has a few more items to check on his bucket list for 2018.

“I have been blessed with a lot of support in my journey,” said Nel. “My coach Quintin Williams, the Ernie Els and Fancourt Foundation and GolfRSA, the staff at the Free State Sport and Science Institute and Free State Golf Union have all played a role to help me reach this point in my career.

“But I am not thinking about pro golf just yet. I think amateurs get impatient, but this game is a marathon, not a race. We have to put in the time, pay our dues and take things step by step. It’s the only real way to progress. I feel like I’ve learned a lot this year and I have matured, but I still have a ways to go in terms of experience before I can take the next step on the ladder.

“I’d like to win a few more titles and break into the top three in the rankings. I’d love to put on the green blazer and represent South Africa. And I would love to make the GolfRSA National Squad team for the UK tour next year to have another chance to experience international competition.”