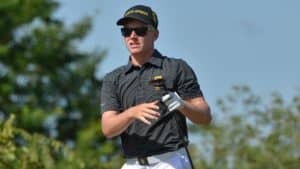 Teeing off on the first in the second round, he cruised his way to five-under without a dropped shot in sight up to the 15th hole. He made his only bogey of the day on the challenging par-three 16th, and more than redeemed himself with that eagle which exemplified his approach to playing the course which can seem intimidating.

“I’m not really used to shooting these kinds of scores,” he said. “I can do it in social rounds, but not too often in tournaments. But I’m just not making mistakes at the moment and I’m really happy with the way I’m playing.”

His seven-stroke lead at the halfway mark was assisted by two of the players who looked as if they could stay in touch with him. 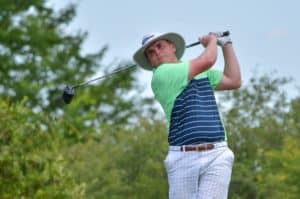 Mallow’s Sugrue got his second round to seven-under through 16 holes and 10-under for the tournament. Then he made a triple-bogey seven on the eighth and signed off with a 68 for a share of second at seven-under.

The other player who could have been closer was countryman Christo Lamprecht, who made double-bogey on 16 before coming home on one-under 71 for the round and six-under for the tournament.

He was in fourth place on his own after his round.

“I played pretty nicely today,” said the Southern Cape golfer. “Yesterday was just better scoring, but I felt like I managed to play really good golf. I was three-under with three holes to go and hit just one bad shot – the first really bad shot of the week – and I got punished for it.” 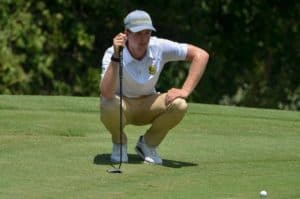 The man who did play himself into a share of second was the winning captain of the Toyota Junior Golf World Cup champions, Vorster.

The GolfRSA National Squad member carded the second-best round of the day behind Van Velzen with his five-under 67. He went bogey-free to the turn at 18, and made four more on his way home.

There were bogeys on three and seven which left him further back from the lead than he would have liked. “I played really solid from tee to green,” said Voster. “The putter was a bit cold in the beginning, but it got hot towards the end. I’m going to have to go a bit lower. I like chasing and knowing that I need birdies to catch up.”

He will have it all to do, because Van Velzen is going to take the same approach. “I’m just going to keep doing what I’m doing and shoot another low one tomorrow,” he said.

Meanwhile Team South Africa Juniors pulled four shots clear in the 54-hole Team Competition, thanks to Van Velzen anchoring the young side for a second day running. New cap Christiaan Maas contributed 70 and Jordan Duminy 74 for a total of 210 that moved the team to 12-under 420.

Team South Africa share second on four-under on 428 with defending champions England, with Team Ireland a further two shots back. Team Sweden rounds out the top five on one-over 433.

Click HERE to view the Second Round Team Competition Scores

Written by Mike Green and Lali Stander and released on behalf of GolfRSA.