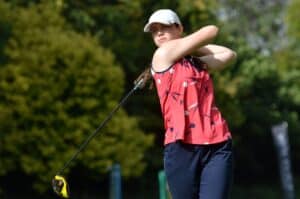 6 February 2022 – Kyra van Kan is looking to draw on her good experiences at Royal Johannesburg & Kensington Golf Club, as the 16-year-old makes a tilt for the South African Women’s Stroke Play Championship title.

The Glendower junior opened her account in the 54-hole event with a solid round of 1-under-par 71 that sees her share the lead with Western Province’s Isabella van Rooyen and Ekurhuleni’s Kiera Floyd.

Van Kan has plenty of good memories of both the event and the venue, having finished tie-third here in 2020. In that year she made a charge for the SA Amateur title, ultimately losing out on the chance to become the youngest winner in SA Amateur history when she went down to Caitlyn Macnab in the 36-hole final.

Last year she claimed a top-10 in the Stroke Play before losing in the quarter-finals of the Match Play.

“I’m really enjoying being out here,” she a said. “It’s my first tournament of the year so I was a little bit rusty, but I was able to stay relaxed and I definitely play my best when don’t have anything running through my mind.”

She began the day with a two-putt birdie on the East Course’s par-five first hole and although she dropped a few shots on the way, she birdied all four par fives to keep her score in the red.”

“I was hitting my driver really well and I putted nicely, so it is just my irons that I need to sort out,” she said, as the players switch courses to the West Course for the final two rounds.

“I really love the West Course layout. Given the massive amount the course has received in the last couple of weeks, the condition is mint. I’ll just take some deep breaths and relax myself and concentrate on staying in the moment.

“There are two more days and a lot of holes to go, so I won’t get ahead of myself. And I won’t get down on myself either. It’s so much more enjoyable being out here than being stuck in a classroom at school.”

SA No 1-ranked Van Rooyen eagled the final hole to sign for a round of 71 to join her fellow GolfRSA National Squad members in the final group in Monday’s second round.

New squad inductee Gabrielle Venter from Free State and Gauteng’s Marine Legentil finished the first round on 1 over par, one stroke ahead of defending champion Megan Streicher from Boland, while Southern Cape’s Chloe Malgas-Kelpin – another rising star in the National Squad, finished a shot further back.

Top-ranked junior Samantha Whateley heads a group of five players, including Kim Turgut, Stephanie Barbaglia, home favourite Shannon Berry and Bea Breedt, who round out the top 10 on 4 over par. 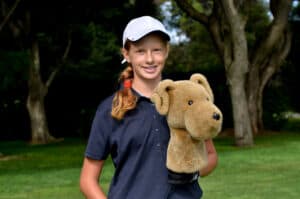 Van der Merwe’s twin, Ame, is a further stroke back in joint third with mid-amateur Veronica Paddy on 17-over.