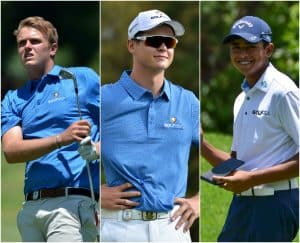 Deon Germishuys, Wilco Nienaber and Yurav Premlall will chase Jovan Rebula in pursuit of the Freddie Tait Cup in the 2019 SA Open, hosted by the City of Johannesburg at Randpark Golf Club.

The Freddie Tait Cup – awarded to the leading amateur who makes the 36-hole cut – is the hottest ticket item in amateur golf and boast some illustrious past winners, including Major champions Ernie Els and Trevor Immelman and European Tour winners Branden Grace and Brandon Stone.

And another former winner, Charl Schwartzel, soared to the halfway lead in the R17.5 million tri-sanctioned event, hosted by the City of Johannesburg.

The former Masters champion holed out for an eagle at the par-four 17th on his way to a nine-under 63 on Bushwillow Course and pole position on 12-under 130.

Intent on following in his famous uncle Els’ footsteps, Rebula laid down a marker with an opening four-under 67 at the Bushwillow Course to lead the seven-man amateur challenge. The George golfer retained the overnight lead on five-under after carding a one-under 70 on Firethorn, but his fellow GolfRSA National Squad team-mates are in hot pursuit.

South Africa’s number one ranked Nienaber moved within a shot of Rebula with a two-under 69, while 2018 Sanlam SA Amateur champion Germishuys and Premlall carded respective rounds of 70 and 67 to start the weekend in a 14-man tie on two-under.

Nienaber got off to an explosive start with an eagle at the par five first on Bushwillow.

The big-hitting Bloemfontein bomber fired three birdies in a row after the turn to go seven-under for the tournament, but he dropped back to four-under when he finished with a trio of bogeys.

“I really made nice birdies on 10, 11, 12; I hit it quite close, so it was unfortunate the way I finished,” said the 18-old Grey College matriculant.

“I had a wayward tee shot on 16 that cost me. We waited quite long on 17 for second shots and it took the rhythm out if the swing a bit. I hit it in the water and made a good six. At the last, I hit a poor second shot and couldn’t save par. The wind was swirling quite a lot and it would drop at intervals, so it was tough to judge club selection. You had to pick your line and just trust the shots.

“It’s my first SA Open and this tournament is really living up to its billing. I was shaking for the first 15 holes in the first round. The putter face was just opening and closing all the time. I felt much better out there today and I feel confident going into the weekend.”

Germishuys also burst from the blocks with an eagle start at Bushwillow, but the Strand golfer was in big trouble after four bogeys on the bounce from the fourth and a double at the par three eighth.

“I got a bit lucky on the first hole,” said the Ernie Els and Fancourt Foundation player. “I blocked my drive right but it kicked out to the fairway. I hit gap-wedge to two metres and holed the eagle putt.

“Then the swing went haywire. I dropped four in a row and after the double at eight I thought it was over. Then I made a long birdie on nine. My brother Johan, who is on the bag, said: “Come on, you can make a few more.”

“I hit a really flippen good drive into 14 to two metres and made the putt. At 17, I was just left of the fairway in a bit of a thick lie. My brother told me I need one more birdie. I thought about laying up but he said: “You never lay up.” I hit a 4-iron just over the left bunker, chipped it to a metre and holed the putt for birdie. Good par on the last and that guaranteed me a start on the weekend.

“I’m really stoked to play in my first SA Open and this has been an awesome experience so far. The hype, the sponsors, the branding, everything. I played with Trevor Immelman and Francesco Molinari and it was fantastic. I couldn’t have asked for two better playing partners in my SA Open debut.”

Premlall, at 15 years and five months, is the youngest amateur to qualify for the SA Open and now the youngest to make the cut.

In the last two months, the Glendower junior won his first Sunshine Tour Junior Series and two events on the Open Amateur circuit – the Silver Salver and the Central Gauteng Open. He took that form to Country Club Johannesburg Qualifier, where he beat the field with a six-under-par 66 to secure his spot in the SA Open.

After a nervous start with a two-over 73 on Firethorn, the confidence returned and he racked up birdies at one, three, nine, 11 and 17 on Bushwillow.

“I hit a great chip to three foot at the last, but I hit the putt lipped out,” said Premlall. “That bogey finish left me right on the cut-line. It was a long, nerve-wracking afternoon to wait and see where the cut would fall. I’ve had a great time so far and after the disappointing start, it all started to flow again on Bushwillow.

“I’m having so much fun playing in my first professional tournament. It’s everything I dreamed of. My parents and friends came out to support me and my grandparents, who drove up from Durban. I’m so excited to play this weekend. It’s a dream come true.”

A total of 70 players from the 270-player field made the cut, set at two-under 140, but it was a short week for fellow GolfRSA National Squad members Christo Lamprecht and Matt Saulez and Centurion amateur Nicholaus Frade.

Southern Cape’s Lamprecht carded rounds of 72 and 77 to miss by eight. Frade shot rounds of 71 and 81 and Saulez from KwaZulu-Natal posted rounds of 80 and 75.

PHOTO 1 – South Africa’s top ranked Wilco Nienaber in action during round two of the 2019 South African Open, hosted by the City of Johannesburg, at Randpark Golf Club; credit Ernest Blignault.