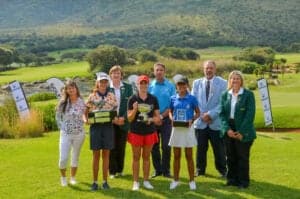 Barbaglia broke through to claim a first national victory in a tightly-fought contest in the A-Division and reigning SA Women’s Stroke Play B-Division champion Van der Merwe lifted her second national B-Division trophy, while 12-year-old Zoey was victorious in the C-Division in her debut in the junior flagship event.

Barbaglia fired a solid round of level par 72 to share the lead with fellow GolfRSA National Squad members Whateley and Zane Kleynhans, who racked up five birdies coming home to set the early clubhouse target.

The Bryanston junior followed that up with a second-round 73, matched by Whateley, to hold on to a share of the 36-hole lead. The duo began the final round a stroke ahead of Kleynhans and Kyra van Kan, who posted successive rounds of 73, 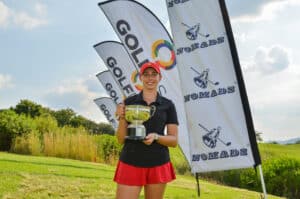 Glendower’s Van Kan quickly made it a three-horse race with a brace of birdies on the second and third holes, but while first Whateley, with a triple-bogey on the ninth and then Van Kan, with a triple on the 11th, fell away, Barbaglia was steady and turned level for the day.

An eagle from Whateley on the 11th brought her back into the contention, but Barbaglia was able to hold her nerve down the closing stretch to close out a one-stroke victory.

“My iron play was really solid this week, and it helped me stay consistent and out of trouble,” she said. “I could feel the nerves coming on towards the end, so the birdie on the par-three 15th was key, as it gave me some breathing room.”

Barbaglia dropped shots on the 16th and 17th holes, but a solid par on the closing par five – as Whateley’s long birdie attempt agonisingly lipped out – was enough to secure the biggest title of her career.

“I’ve been working really hard on my game lately,” she said, “so for everything to finally come together for me to get my first big win is amazing.

“I want to thank Nomads and GolfRSA for everything they do for junior golf in the country. And we are so grateful to Sun International for supporting junior golf. To be able to come here to Sun City and to play such a stunning golf course is a real privilege for us.” 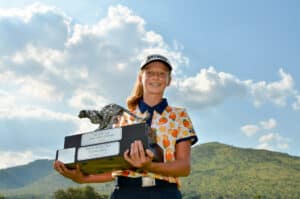 Van der Merwe lagged one shot behind Anna-Isabel Scheltema in the B Section battle at the start of the final day after posting rounds of 80 and 81, but she birdied the first to draw level and when the Devonvale junior made eight on the par-five 11th she opened the door for Van der Merwe to pounce.

The Zwartkop Country Club junior took control and made it two national titles in a row when she edged Scheltema by a single stroke with a final round 81. Her twin sister Ame tied for third with Centurion’s Lourenda Steyn.

King David Mowbray Golf Club’s Rhoda was in the driver’s seat with an opening round of 31 points, and she stretched her lead with a final round 37 to lift the C-Division title by seven points from Randpark’s Danielle Chong.

“We, the Nomads Golf Club of South Africa, through our Furtherance of Golf program have been sponsoring the two 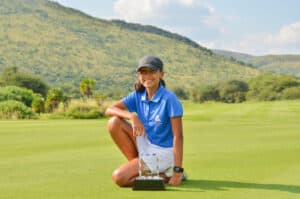 flagship events on the women’s junior circuit for more than a decade and it is absolutely fantastic to see young talent coming through the ranks,” Malherbe said. “It was quite incredible to see young juniors play such high calibre golf, and really enjoying it out there, and I was delighted to see so many new players making the trip to Sun City to compete at national level.”

“Last year we launched the Nedbank Junior Challenge for the boys, and we were delighted to welcome the junior girls to our stable of sponsorships this year and join the strong development drive of women’s golf in South Africa,” Payet said.

“Lost City is a not an easy course. If you hit fairways and greens and execute well, the birdies will come, but any errant shots are punished. So, it was wonderful to watch these juniors embrace the challenge over the two days and to see so many smiles and high-fives. Judging by the exceptional golf played by the A-Section, the future of women’s golf is very promising.”