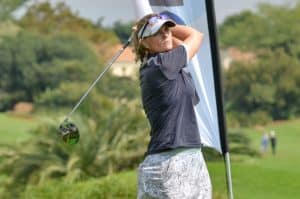 Vicki Traut from Western Province fired an even-par 72 in windy conditions to lead the first round of the SA Women’s Mid-Amateur at Selborne Golf Estate, Hotel and Spa; credit GolfRSA.

12 November 2019 – Vicki Traut lived up to her pre-tournament billing when she opened up a five-shot lead in the first round of the SA Women’s Mid-Amateur Championship at Selborne Golf Estate, Hotel and Spa on Tuesday.

Heavy rains on Sunday and Monday forced Womens Golf South Africa to call off the scheduled first round, and shorten the flagship event to 36 holes. The championship teed off in strong wind on Tuesday with nearly 100 mid-amateurs and seniors contesting three divisions.

The debutant was tipped as a favourite after she outclassed some of the country’s leading amateurs to win the 39th Ackerman Championship in late October and Traut did not disappoint.

She quickly made her presence felt to tie for the lead through nine holes and the in-from Western Province golfer showed off her skills in the wind on the homeward loop to pull away from the field with an even-par 72.

Southern Cape’s Sandra Winter, a record four-time winner, finished a further stroke back in joint sixth with Lynne Behagg from Boland and Jane Mackenzie from KwaZulu-Natal.

“We didn’t think we would be able to play given all the rain. They had 90mm on Sunday and another 55mm on Monday, but we got the go-ahead and I have to say, I’ve never seen a course recover so well,” said Traut.

“We were warned that there might be wet patches and casual water on the course, but we anything of the kind. What we did have to contend with, though, was a three-club wind. The course was set-up tough, but fair, but club selection was key.

“The front nine is a bit more open and you can go for it, and I made a couple of good pars to start and then dropped on the third. I just kept telling myself to stay patient and to keep it in play.”

Traut cancelled the bogey back-to-back birdies on seven and eight to tie Bland on one-under.

“It was nice to make a few birdies, because the wind really came into play on the back nine,” said six-time Erinvale club champion. “I bogeyed 10 and dropped shots on 12 and 13. I missed the greens, either under-clubbing or over-clubbing in the wind.

“The back nine has a lot more elevation. You might be hitting down but you have a three-club wind so you have club down. And you’re standing on a slope. That’s why choosing the right clubs were vital. But there are some fantastic holes. We were all saying how well they are laid out.”

After some misses, Traut got the measure of the wind and racked up two birdies coming home.

“The wind was howling from the right on the par three 14th. You have to aim it straight at the green, commit to the shot and hit it as well as you can and believe the wind will bring it back and that’s pretty much how I played the hole,” Traut said.

“My caddie’s lines were good all day and I was seeing them well, too, so when he gave me the line I had this feeling that I had the line and the speed and the putt dropped for birdie. The 15th and 16th holes went quite nicely, as well, with two really good pars.

“The finishing hole is a great risk-and-reward hole. In the middle, before the bunkers, there are two palm trees with hazards on either side. It’s almost as if you are in more trouble if you leave it short than taking the driver and smashing it down there. You really have to trust your driver and mine was on song today.

“I had a three-quarter lob-wedge in and it spun so nicely and sat beautifully on the green. My caddie said it’s the same line as the par three .left-lip and I could see it, too. Felt great to finish with a birdie with some spectators standing behind the green, cheering us on.”

Day one action in the B-Division wrapped up with Wendy Frost from KwaZulu-Natal and Gauteng’s Phindo Mohlala tied in pole position on 84.

Lindsay Owen from Gauteng one stroke behind in third, while KwaZulu-Natal pair Lynne Garbutt on 86 and Jacquelyn Porrill on 89 round out the top five.

Rita Teka from Gauteng North posted 32 points to take the lead in the C-Division. The Akasia Country Club golfer leads by one from Border’s Renee Wales.

Janine Meyburgh from KwaZulu-Natal is two off the pace in third, and one clear of Gauteng’s Ilse Van Zyl and local duo Leigh Beckerling; Cecelia Verster