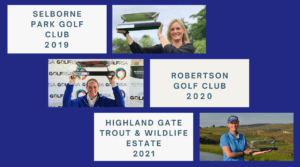 MOSSEL BAY, 8 November 2022 – Vicki Traut will be bidding to become only the second player to win four South African Women’s Mid-Amateur Championship titles when she leads a stellar field into battle next week.

The GolfRSA flagship event will be contested at the magnificent Mossel Bay Golf Club in the heart of the Southern Cape from 13 to 15 November.

This year’s championship has drawn a record entry of more than 150 players, including international campaigners Anita Switale from Tanzania and Germany’s Stephanie Kiefer.

In 2019, Traut went wire-to-wire at Selborne Golf Estate, Hotel and Spa to lift her first title on debut, and she repeated the feat at Robertson Golf Club in a year later. Last year she became the first player to win three consecutive titles with a three-shot triumph at Highland Gate.

The Western Province star will be bringing some great form to Mossel Bay in hot form, having recently won the GolfRSA Champion of Champions Women’s A-Division title, but Traut is taking nothing for granted.

“It was incredibly special to win our national championship three times in a row, and coming back as the defending champion again is exciting, but it won’t be easy to get four in a row,” said the 41-year-old Erinvale golfer.

“The standard gets higher every year, and this year I am especially wary of the local legends, Sandra Winter and Sonja Bland, who will no doubt have the home course advantage.

“Sandra won the 2011 and 2012 editions at Kingswood, picked up her third title at George Golf Club in 2016 and became the first four-time winner in 2017 at Kimberley Golf Club. Sonja won at Graceland in 2013 and she’s won the Senior Trophy a few times. Both of them excel in the windy conditions, which we are no doubt going to experience in Mossel Bay.

“Vanessa Smit is a two-time winner and she showed off her skills in the wind with her second victory in tough conditions at St Francis Links in 2015. And the dark horse is Yvette du Plessis, who plays out of Stillbay Golf Club. She won the inaugural event at Kingswood in 2010. They are all going to be just as keen to win.”

Traut’s title bid could also come under pressure from a number of new faces who have been in striking form on the mid-amateur circuit this season.

New GolfRSA Mid-Amateur No 1 Rene Liebenberg has enjoyed a great run of form. In addition to winning the Southern Cape and Western Province Mid-Amateur Championships, the Langebaan golfer finished second in the Gauteng North Mid-Amateur and third in the Boland Mid-Amateur & Seniors Championship.

“I expect Rene to be in contention, as well as Bongi Shabalala and Charlene Oosthuizen, both first-time winners this season. Heidi van den Berg and Heather Kruger, also in the top 10, cannot be discounted either. All these players were still testing the water in the Championship Division last year, but they have built great experience over the last 12 months and will be playing with a lot more confidence this year.”
The SA Women’s Mid-Amateur Championship launched in 2010 but has quickly grown into one of the top supported events on the GolfRSA national circuit.

“We’ve had some incredible events at awesome golf courses and the growth of this tournament has been staggering. Last year we had just over 130 players and this year we’ve broken the 150-mark. It’s really exciting and I think this explosion in women’s mid-amateur golf is down to GolfRSA, the unions, the clubs and women’s golf working really hard to grow the game. Since the GoflRSA Mid-Amateur Rankings was established in 2018, the circuit has blossomed to include to 14 provincial events and two national events.

“We also welcomed Elegant Fuel as a sponsor, and we are delighted that they are once again supporting the tournament. This bodes incredibly well for the future of this championship.”

Of course, it’s not only the Championship Division that will produce the fireworks at Mossel Bay Golf Club.

In addition, players aged 50 years and above (HI 15.3 and under), will contest the Senior Trophy, which is played concurrent with the championship.

“The GolfRSA SA Women’s Mid-Amateur Championship continues to grow in popularity amongst our mid-amateurs. We are very pleased to see great support the event receives from the past winners and former entrants across all the divisions, and we are so excited to welcome a lot of new faces to Mossel Bay Golf Club,” said Womens Golf South Africa President Sarah Braude.

“The interest in this year’s event speaks volumes to the tournament’s popularity and the growth of the women’s mid-amateur game at national and provincial level. We hope to inspire many more women and young girls across South Africa to take up the game.

“The three divisions were tightly contested last year, and we expect it will be even more exciting this year, given the big field, and the large number of Southern Cape golfers who will be looking to impress.

“We are also delighted to showcase Mossel Bay as a wonderful travel destination on the Garden Route and to play our part in supporting the local industry.”