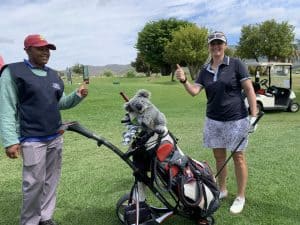 16 November 2020 – Vicki Traut’s title defence in the South African Women’s Mid-Amateur Championship got off to a strong start as the Western Province golfer opened up a four-shot lead in the first round on Monday.

Traut bookended a round of two-over-par 74 at Robertson Golf Club with birdies to finish well clear of former two-time champion Vanessa Smith.

The Erinvale golfer was one-under and flawless through the turn, but stumbled with a double bogey at the par four 10th and dropped further shots on the 15th and 17th holes.

“I underestimated the second nine a little bit,” Traut said. “The wind blew stronger on the homeward loop and the greens were a little firmer. You got quite a bit of roll, so it was difficult to hit it close enough for birdies.

“I find the second nine technically more challenging, especially the last four holes and I am actually quite happy to have played it the way I did. It’s nice to play two nines that are so different, because it forces you to raise your game.

“It’s always wonderful to start with a birdie and to finish with another one was really satisfying, because you really have to plan and execute really well on the back nine. You have to know where to hit it on the last four holes. I was super happy with the birdie finish on 18. It was strategically placed bunkers and you can land yourself in deep trouble on that closing hole. I’m really happy to have finished the way I did.” 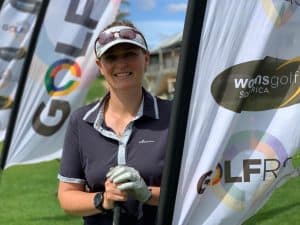 Traut applauded her local caddie, Melissa Nobel, for helping her minimize the damage.

“She may not have a lot of experience, but I thought Melissa did a really fantastic job. Although she is quiet, she has real presence and I was so impressed with her,” Traut said. “I think if you could teach her more she could go far. She has a keen sense of how golf works. I enjoyed her company and I’m very glad I decided to support the local caddies instead of pushing my own trolley.”

Fellow Western Province golfers Nina Grey and Hayley Davis are further stroke adrift in joint third alongside with Heidi van den Berg from Gauteng North and Southern Cape’s Sonja Bland, the 2013 champion and winner of the LGU Quaich Senior Trophy in 2018 and 2019.

George golfer Sandra Winter – the only four-time winner of the national title – sits within six shots of Traut’s lead in seventh place, while Rene Liebenberg from Boland, Gauteng North’s Karin Watts and Elmien van Niekerk from Kuruman Golf Club in the Northern Cape complete the top 10 on 14-over. 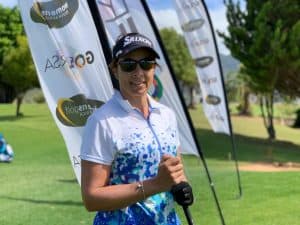 “It’s my first time playing this course and I was a little nervous standing on the tee this morning,” Kruger said. “I made a few bad choices with my club selection early on, but after a triple on the 10th I had a quiet chat with myself and started playing proper golf.

“The wind was a bit of a factor but I played a lot of my golf in the Eastern Province. I didn’t have too much trouble adjusting to the one-club wind. It’s the first time I played here and I like the challenge with the elevated greens. The highlight of my round was definitely my only birdie on the short 14th. I hit 6-iron in and almost holed it. Nice to tap in for birdie there.” 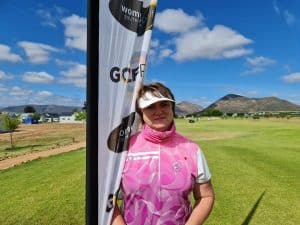 “I never expected to be leading; I’m absolutely thrilled,” Olivier said. “I played here once before in the Inter-Club in 2017 and the greens and bunkers are still just as tricky, but the course has improved a lot and it’s in great condition.

“I had to awesome playing partners in Sarita (De Villiers) and Bev (Weijters) and we had a lot of fun and laughs out there. The round was decent. I ran into a bit of trouble around the turn, but I brought it back nicely. Looking forward to tomorrow.”