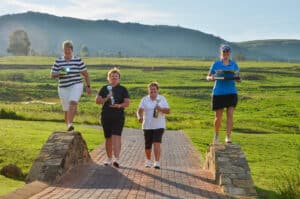 17 November 2021 – Vicki Traut became the first hat-trick winner of the SA Women’s Mid-Amateur Championship when she successfully wrapped up her third title at Highland Gate Golf & Trout Estate on Friday.

Traut slept on a comfortable cushion after earlier rounds of 80 and 75, leading 2018 champion Liezl Smit by five shots at the start of the final round. Vanessa Smith, the winner in 2014 and 2015, a further four shots adrift.

The Erinvale golfer powered to a three-shot victory with a final round four-over-par 76 to finish the week on 15 over par.

“To be able to win the national championship is incredibly special, and to do it at this Ernie Els signature course is a dream come true,” exclaimed the 40-year-old.

“This course is so beautiful, but it is also one of the most challenging courses I’ve played. It really tested us. It means the world to me to be the first three-time champion. I never in a million years thought I could achieve that, and I am very proud of this record.” 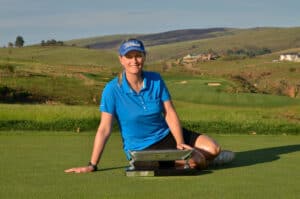 Traut kept a tight hold on the reins going out, but a few dropped shots coming home gave her pursuers a glimmer of hope.

“The back nine is really tough, especially under pressure and playing against some seriously good golfers,” Traut said. “Knowing the hat-trick was on the line, I made a few silly mistakes that cost me on the 13th, 15th and the 17th. But I managed to survive. It was a big relief to tap in for the win on 18 and realise my goal.

“This is a young championship. It only started in 2010, but it has grown exponentially. This year we had more than 90 players and that is down to the great work done by GolfRSA and Womens Golf South Africa. It was also fantastic to see Elegant Fuel come on board as a sponsor. It all bodes incredibly well for the future of the SA Women’s Mid-Amateur Championship.”

And, yes, Traut will be back next year to gun for four in a row.

Vryheid Golf Club’s Smit finished second on 18-over after carding 74 and Smith from Paarl Golf Club was third on 30-over after a final round 82.

The celebrations didn’t end with Traut. 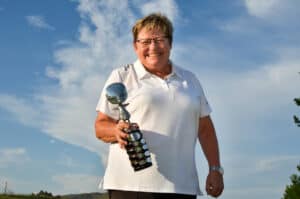 The other big winners of the week were Rose Powell, with a popular home victory in the B-Section, Louise Olivier who claimed the C-Division honours, and fellow Boland golfer Lynne Behagg, who edged three-time champion Sonja Bland and Karin Watts for her first Senior title.

Powell didn’t let the injury slow her down. The 58-year-old Kambaku golfer marched to a five-stroke victory over Centurion’s Kerry-Ann Murgatroyd and Jenny du Preez from Kingswood.

“Gosh, I made a real hash of the last hole and took an eight, but I am very happy that I kept a cool head for the first 17 holes,” Powell said. “My aim today was to try to make as few mistakes as possible, and where I failed, I took my punishment.

“I am delighted that I decided to play at the end. I tore the cartilage in my right knee three weeks ago kicking a soccer ball, and thought about withdrawing, but I love this tournament. My playing partners were amazing, and the good old knee guard did the rest.

“This tournament is the pinnacle of our season, and I just couldn’t miss the chance to catch up with old friends, meet new people and play a seriously great golf course. I want to give a special salute to the green staff for presenting us with such a manicured golf course. It was absolutely pristine.” 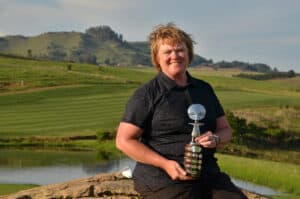 Olivier was absolutely delighted to improve on her third-place finish at Robertson Golf Club last year to come up trumps in the highly-contested C-Division.

The 52-year-old Devonvale golfer posted rounds of 34, 32 and 33 to triumph on 99 points, finishing 6 points ahead of debutant Noku Khathi from Greenside Colliery Golf Club.

“It’s such a special feeling to hug this trophy,” said Olivier. “I could feel the tension on the course, especially with Dot (van Ryneveld) and Noku in our four-ball. I am over the moon that I pulled it through.

“Highland Gate is seriously intimidating, especially at first glance. For me, it got more difficult as the tournament went on, because it got into my head. Hats off to GolfRSA for bringing us here. I don’t think I would ever have played this course if not in this championship. It really punishes you for errant shots, but the elation and joy you feel when you make birdie or par is indescribable.

“I love this championship and it was absolutely fabulous to see so many new players tee it up in the B- and C-Divisions this year. And a big congratulations to Noku. She is just nicest person. She kept her cool under pressure playing with us experienced competitors in the final round and I am so proud of her for finishing second in her first SA Mid-Am.” 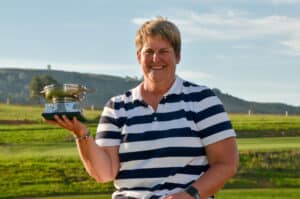 Behagg began the final round on 24-overwith a two-shot lead over Bland and Boland golfer Karin Watts, with Bongi Shabalala lying six points adrift in fourth. The 51-year-old, who tied for fifth in the Championship Division, was thrilled to return to Hermanus with the Senior trophy.

“I have been playing golf for years, and I love competition and the fire in your belly that comes with events like these. To be a senior now and still be in contention in the Championship Division is pretty special,” said Behagg, whose rounds of 81, 87 and 85 netted her a two-shot victory.

“The key today was to protect my two-shot lead. I wasn’t fearing anybody, just myself. To hold a small lead is hard, especially against a player of Sonja Bland’s experience and she played really well, but I kept it together. That bunker shot on the 18th was nerve-wracking and I must admit, I was relieved when I hit a good shot to have two putts for the win.

“The fun and the camaraderie of this championship sets it apart. We play hard and we party hard, and we have a lot of fun doing both. It was fantastic so see the upswing in entries this year, which goes to show that this tournament is gaining great traction. It’s only going to get better and better.”