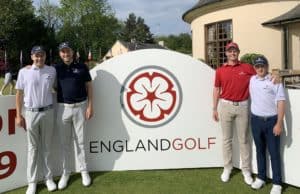 LEEDS, England (30 May 2019) – GolfRSA National Squad quartet Luca Filippi, Therion Nel, Wilco Nienaber and Jayden Schaper had a tough first day as their hunt for the Brabazon Trophy in the English Men’s Open Amateur Championship got underway in England on Thursday.

Filippi from Western Province led the way at the Alwoodley Golf Club in Leeds with an opening one-over-par 72.

The Milnerton golfer birdied all three of the par fives – three, eight and 10 – to reverse a trio of bogeys. Despite ruining a run of straight pars from the 12th with a bogey finish, South Africa’s number two ranked amateur secured a top 30 finish on a tough scoring day.

Filippi will start the second round six shots adrift from Englishman Charlie Strickland, who surged to the top of the leaderboard with a flawless five-under 66.

“I played really nicely from tee to green and I could have gone deep, but the putter never warmed up and I missed a lot of birdie chances on the front nine,” Filippi said.

“It wasn’t easy out there with heavy wind and rain, especially down the tough closing stretch, but I’m pleased that I kept it together. I was hugely disappointed to finish with a bogey, but I’m going to do some work with the putter and hopefully I can put a low one on the board on Friday.”

South Africa’s number one ranked Schaper and Bloemfontein pair Nienaber and Nel also battled down the home stretch, however the trio are also comfortably placed in the 122-strong player field. Schaper and Nienaber finished in the top 50 after rounds of 73, while Nel finished a further shot back in the top 60.

Ebotse’s Schaper was level through the turn and birdied the 15th hole after a double bogey at the par four 13th, but he let another shot slip at the penultimate hole.

Nienaber fired an eagle-three and a pair of birdies on the front nine to cancel three bogeys, but further dropped shots at 13, 16 and 18 saw the Free State golfer slip to two-over,

Nel also turned in red numbers after birdies at the third and eighth holes, and he dipped three-under with a birdie at the par five 10th. Unfortunately the Ernie Els and Fancourt Foundation member gave back six shots to the field on the back nine to sign for three-over 74.

“The guys were very disappointed, especially after a really good practice round,” said team manager David Younge from GolfRSA.

“The weather conditions were tough. We teed off early in a strong 25 km per hour wind and with the wind chill factor it was probably close to 10 degrees with rain falling throughout the day.

“The course was not stretched all the way, but the fairways are very narrow with a lot of doglegs. The only way to score is to position yourself well off the tee, because the second shots around this layout is really tough.

“The Poanna greens are quite big and flat with lots of subtle undulations. The positions were fair given the wind, but the greens are fast, running at about 11 on the stimp meter, and a bit bumpy.

“Overall, the guys are in a good head-space, but there was disappointment in the camp. Luca’s ball striking was brilliant, but he battled with the flat-stick. He had 36 putts, so no surprise – he went straight to the putting green after play.

“Jayden, Wilco and Therion were all really solid, but a bad bounce or a bad decision here and there cost all of them shots, especially over the last five holes, which are incredibly tight and tough. Jay was really unlucky at 13, where he missed it right. Although this is the side where you want to miss it, he had a shocking lie and had to hack it out of there. He ended up making the up-and-down for a double bogey.

“The players have been exemplary ambassadors since we arrived in Leeds and I am really pleased that spectators have come up to me to compliment GolfRSA on our players’ behaviour, etiquette, dress code and demeanour. They are a great bunch of boys and in a good head-space, so I have every confidence that they will bounce back in round two.”