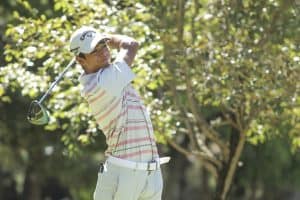 19 February 2019 – With 17 foreigners through to the top 32 of the match play, there is a very real possibility that amateur golf’s most prized trophy might travel abroad again.

However some of South Africa’s most promising talents demonstrated incredible fighting spirit in the first round on Tuesday to ensure the local challenge in the South African Amateur Championship at King David Mowbray Golf Club stayed on track.

Glendower teenager Yurav Premlall made it 15 South Africans in the starting line-up for second round on Tuesday when he rallied over the last two holes to beat Englishman Lewis Pownell 2-up.

The 15-year-old GolfRSA National Squad player hit his first tee shot out of bounds, and was on the back-foot for the first 10 holes, but squared the match with a birdie at 11.

“I went 1-up when Lewis bogeyed 12, but we were back to all square when I dropped 15. I hit a great tee shot on 16, but I left the birdie putt short and he also made par. I hit another good tee shot on 17, and made an up-and-down for birdie to go 1-up.

“At 18, I hit another wayward tee-shot and had to grind it out, so I’m really happy with the result. I’ll spend some time on the driving range to try and work out what’s going wrong with the driver, but I’m happy that the rest of my game held up under pressure.”

Jordan Duminy – an up-and-coming golfer from the Louis Oosthuizen Junior Golf Academy in the Southern Cape – delivered another stunning blow for South Africa. The 16-year-old birdied the first two holes and reeled in two further birdies and an eagle at the par five ninth to mow down Englishman Mark Hyde 6 & 4.

The Brits hit hard, though, with Joseph Long and Noah Hessey from England, Welshman Gaelen Trew and Jeff Wright from Scotland removing four South Africans from the draw.

Last week’s African Amateur Stroke Play champion Euan Walker from Scotland did South Africa a favour by knocking out Irishman Tiarnan McLarnon 7 & 6 result and Irishman James Sugrue took another foreigner out of the draw with a 2 & 1 win against Aymeric Laussot from France. 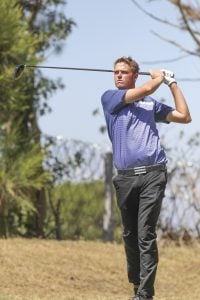