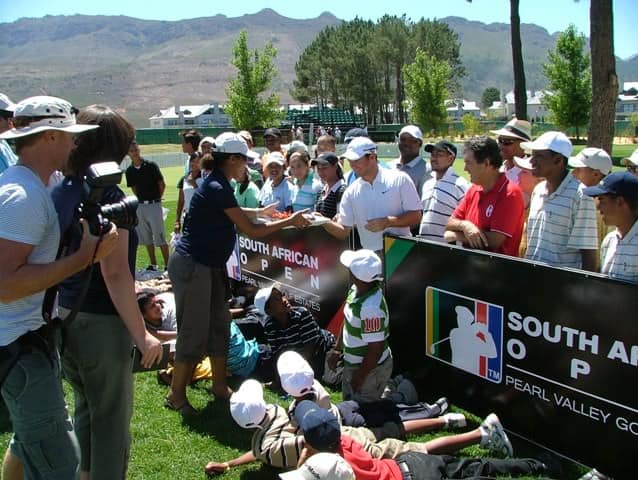 Some of the top young amateur golfers who participate in golf development programmes in the Western Cape got to see, watch and learn from three of South Africa’s top professional golfers on Tuesday.

Trevor Immelman, who won the US Masters this year, shared his knowledge and experiences with about 30 young and enthusiastic players. Little did those attending know, but it was Immelman’s birthday. The organisers arranged a birthday cake and when presented to the popular professional golfer they all willingly sang Happy Birthday.

Retief Goosen, who has won the US Open, also demonstrated his skill and shared his experiences with the young players in attendance. David Frost, who is based in the Boland, gave tips to the youngsters on how to play the short game. “I will leave the long game to the young guys they are stronger,” he quipped.

Rodney Hess, who is the Development Manager for the Western Province Golf Development programme, brought twelve boys and eight girls to attend. Amongst these was Aslam Mallick who has already represented her province at under 14 level.

Peter Jones, who heads up the Raymond Ackerman Golf Academy brought nine boys and two girls. He said that the Academy use golf as an outreach to improve young people’s life skills and education. “We have a number of kids on the programme including five from Masiphumelele near Fish Hoek in the programme,” he explained.

Michael Bredenkamp, of the Golf Development Board, said that all the players he brought were single figure handicapped golfers. “We have players here from Athlone, Somerset West and the Belhar areas,” he explained.