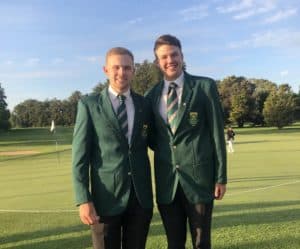 Abel Gallegos and Andres Schonbaum gave the local fans plenty to cheer about at the Los Lagartos Country Club when the pair edged out France for victory on two-under 566.

Filippi and De Beer had slipped to sixth after posting a battling seven-over 149 on day three, but the GolfRSA National Squad pair rallied with a two-under-par 140 on the final day to tie Spain for fourth on 10-over 578.

“We both feel that it really could have been better, but we are pleased that we pull it back some,” Filippi said. “Unfortunately the third round hurt us, but we are proud that we managed to keep South African’s record of top five finishes alive.”

“I got off to a shocking start with a double on the second, but I pulled it back with some good putting today,” Filippi said. “I hit my third shot out of bounds on the second and made seven on the par five, but I managed to bounce back with three birdies in the next four holes.”

The Milnerton golfer turned one-under and birdied the 11th hole after a three-putt bogey on the 10th.

“Then I hit it give on the 13th and also birdied the 15th to get it to two-under for the day and made sure of the pars coming hole,” said Filippi. “I was hitting it well for most of the round, but the putter made all the difference.”

De Beer also fared better on the last day and the Ernie Els and Fancourt Foundation duo is keen to the form from the final round to the Estancias Country Club for the 72-hole Argentine Stroke Play Championship next week.

“I bogeyed the first and the third. It was hugely frustrating to be behind the eight-ball again, but I made two great putts on five and six to gain some momentum again,” said the Port Elizabeth golfer.

“After a birdied the fifth hole, I hit a great drive straight down the middle on the par five. I had 195 metres in, with the wind into us and off the right, and the flag tucked in the far left back corner.

“I tried to hit a low 5-iron so I could just run it up the middle of the green. I caught it nicely and it pitched in the far right corner. I had probably a 60-foot putt across the green. It tracked all the way and dropped for eagle.

“Unfortunately, that’s where the good golf ended, because I made absolutely no putts after that. I hit the ball beautifully and gave myself chances on almost every hole, but I just couldn’t convert. A really frustrating day at the office. The course-set was quite tough, so if you had offered me a level round at the start of the day, I would have taken it. However, with the way I was striking the ball, it was still a bit disappointing.

“That said, Luca and I are having a great time here in Argentina. We’ve bicycled our way around Pilar to take in the culture, tried some new food and made some great friends. And after building some confidence this week at Los Lagartos, we are itching to start the Argentine Amateur.

Argentina’s was two-for-two after Andrey Borges edged out compatriot Marzilio Vicente by three shots to capture the individual competition on 11-under 273 with rounds of 65, 67, 69 and 72.