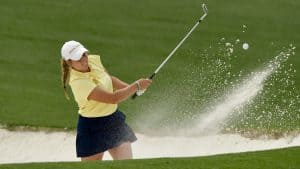 Kaleigh Telfer of South Africa plays from a bunker on the No. 18 hole during the final round of the Augusta National Women’s Amateur, Saturday, April 6, 2019.

7 April 2019 – South Africa’s Kaleigh Telfer closed out a top 12 finish at Augusta National as the world’s top-ranked amateur Jennifer Kupcho from the United States became the first champion of the Augusta National Women’s Amateur on Saturday.

Telfer began the inaugural event strong and was third on her own after an opening three-under-par 69 at the Champions Retreat Golf Club and looked a shoe-in for the top 30 who would contest the final round on the hallowed turf of the Masters venue, but a second round 76 to slip to three-over landed the GolfRSA Elite Squad in a sudden-death play-off for the last 10 spots.

The Bryanston golfer made a spectacular up-and-down in extra time to seal her start at Augusta National.

Kupcho was trailing playing partner Maria Fassi from Mexico by two strokes after 12 holes, but she played her final six holes in five under par to prevail.

An eagle on the par-five 13th kick-started impressive second-nine stretch for the Wake Forest senior that also featured birdies on the par five 15th, par three 16th and the iconic par four closing hole, where she drained a 25-footer for victory.

Earlier in the round, 21-year-old Kupcho fought a migraine that resulted in blurry vision, but she battled back to record a five-under-par 67 – fittingly, the lowest round of the championship – to win by four strokes on 10-under-par 206.

“It’s always a great feeling to win, but to win at Augusta National is an experience like none other,” said the champion. “Just to get to walk the fairways and walk up 18 with as many fans as there were was amazing.

“I think, first of all, for me to hit the first tee shot of the tournament was a great honour. And then to be able to hit the last putt and to win, it’s just amazing. It’s an amazing feeling, to have my brother here, to have my parents here, everyone out there supporting me. It was quite a day.”

Zoe Campos (72), one of the youngest players in the field at age 16, and Kaitlyn Papp (74) were tied for fifth at one-under-par 215, while Sweden’s Beatrice Wallin shared seventh on even-par with Haylee Harford and Haley Moore from the United States.

Americans Sierra Brooks and Alice Hewson rounded out the top 10 on one-over 217.