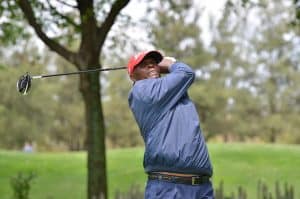 Super Senior Zolile Nqana recorded a 78 on day two to help boost Eastern Province into a tie for number one in the log at the 2021 SA Senior B-Division Inter-Provincial at Erinvale Golf Club.

21 April 2021 – Mpumalanga and Free State rule the roost in the 2021 SA Senior B-Division Inter-Provincial, while Boland and Eastern Province are deadlocked for the lead in the Super Senior Division at the end of day two action at Erinvale Golf Club.

SENIORS
Although the four teams in action in Wednesday’s second round were evenly matched in this year’s adopted Single Medal Match Play format, Mpumalanga and Free State managed to edge first round log leader Ekurhuleni into second spot on games points.

Mpumalanga and Free State both drew their first round matches, and it was more of the same for the new log leaders on day two. 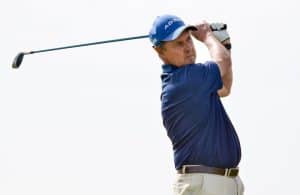 Hannes Spies carded a round of 76 that helped Free State to North West 4 – 4 on day two of the 2021 SA Senior B-Division Inter-Provincial at Erinvale Golf Club.

The two sides are tied at the top with 2 points and 8 games points each.

Ekurhuleni, who gained 2 points after defeating Northern Cape 5 – 3 on the opening day, will be champing at the bit to re-join the action after their second bye.

The Roses tackle Free State on Thursday, while North West and Northern Cape do battle and Mpumalanga takes in the sights of the Winelands.

SUPER SENIORS
A clean sweep against Ekurhuleni propelled Eastern Province alongside Boland at the top of the log, while the hosts edged Northern Cape 3 – 1 to retain their advantage.

Johnson Madikane fired a 74 to set a winning tone for Eastern Province and he was backed up superbly by George Koen (81), Frans Kana (82) and Zolile Nqana (78). The win took EP’s tally to 4 points, with 7 games points in hand.

Boland sits on the same number of points and games points, thanks to the efforts of George Bezuidenhout, Peter van Coller and Tony Bailey. Northern Cape’s Eddie Barkhuizen thwarted Boland’s attempt at a whitewash when he defeated Dewald Botha by one shot with a round of 77.

In the third match of the day, North West and Free State drew 2-all.

North West rose to third in the log on 3 points. The 1 point that Free State earned put the side in fourth place, but Northern Cape and Ekurhuleni still have to get off the mark.