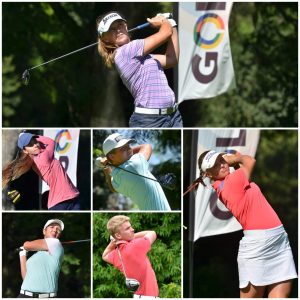 18 February 2021 – The stage is set for the finals of the SA Amateur Championships, with three mouth-watering matches to look forward to that will determine the country’s champions of the year at Royal Johannesburg & Kensington’s East Course.

The 18-year-old from Swellendam edged Macnab by one shot in the Stroke Play tournament earlier in the week and progressed through two tough matches today to reach her first SA Amateur final.

In the morning’s quarter final, Streicher fought back from 2 down with two to play against last year’s runner up Kyra van Kan, holing a long putt to prevail on the 19th hole.

Then, in the afternoon’s semi-final clash against big-hitting Kiera Floyd, she once again came from behind to triumph 2 & 1, sealing the win with a birdie on the 17th. 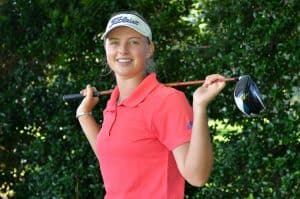 “Both matches were very tough,” said the Boland golfer. “I didn’t hit the ball great in the morning, but my swing improved towards the end. The afternoon session was definitely better from my game’s perspective. The ball striking was better and I putted really well.”

Floyd was 3 up, but dropped three shots in succession from the 12th while Streicher made a string of pars on the back nine.

“Then I won the 16th with a par to go 1 up and that gave me the push I needed to close it down. I hit it down the middle of the fairway, put a wedge to three metres and holed the putt for the win. I’m beyond words. I really excited to play Caitlyn, because she is such a talented ball-striker and she never stops fighting. I think it’s going to be a very exciting final.”

Fellow GolfRSA Elite Squad member Macnab will be looking to become the first player to successfully defend her title since Ashleigh Simon in 2007. 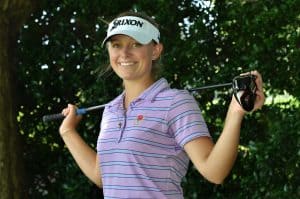 It may have been her 19th birthday, but her opponents showed no mercy.

In a tightly-contested quarter-final match against feisty 2018 champion Jordan Rothman, the Serengeti golfer came up trumps to win 1 up, while unheralded Gabbi Venter was equally relentless over the first 10 holes in the afternoon session.

Macnab eventually saw off the Bloemfontein junior 4 & 3 in a round that not only featured a stunning ace at the par-three 5th hole, but four birdies, including a late pair on 12 and 13 that took her to 4 up and the opportunity to defend her title.

“I expected a tough match with Jordan and she duly delivered,” said Macnab. “I was 4 up at the turn and she just kept fighting and took me all the way to the last.

“The game against Gabbi was also tough, because she is becoming a really good player and she hits the ball a mile. Unfortunately she is struggling with a knee problem, and I could see her discomfort increase as the match wore on.

“Overall I am very happy with where my game is at, although there were a few silly mistakes that I can’t afford tomorrow. Megan is playing some seriously good golf at the moment and I’ll have to bring my A-game to the final.” 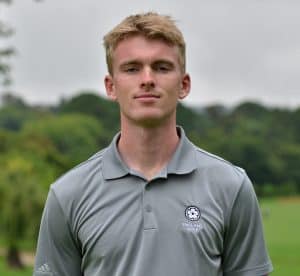 In the men’s event, top seed Jack Dyer continued his sublime form as he crushed Randpark’s Conner Mackenzie 6 & 5 in the quarter finals, with the Englishman at 7 under par when the pair shook hands on the 13th hole.

He then took on GolfRSA No 1-ranked Martin Vorster in a titanic clash between two of the pre-tournament favourites.

“I knew this afternoon was going to be one of the toughest games of the week because Martin is a fantastic player,” said Dyer. “I played with him a few weeks ago at Randpark where he won the SA Stroke Play Championship and he was very impressive.”

After getting into a comfortable 2 up lead at the turn, Dyer made bogeys on the ninth and the 11th holes to allow Vorster back in.

Once again bag-man and compatriot Zach Chegwidden came to the rescue. “It’s a really good thing that Zach fell out when he did,” Dyer said. “I was getting a bit flustered at that point and once again, he did a really good job at calming me down,” said Dyer.

“I hit some good shots over the last five holes, got some good breaks and holed a few lengthy putts for the 3&2 win. I’m obviously really pleased with the outcome and looking forward to a really good final on Friday.” 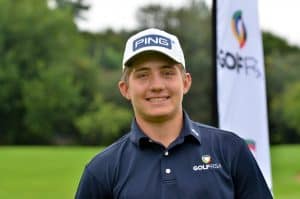 In his 36-hole final, the England Golf Men’s A-Squad member will come up against one of the rising stars in South African golf in 17-year-old Christiaan Maas, who edged Jonathan Broomhead 2&1 in the quarter final and Kieron van Wyk 2&1 in the semi final.

“I knew I needed start off strong because Kieron has been playing so well these last few weeks on the SA Swing,” said the GolfRSA National Squad member, who came out firing against Van Wyk, recording six birdies in his first eight holes to take a 4 up lead.

He then held on as Van Wyk rallied, eventually signing for a 2 & 1 win.

The Pretoria youngster has gathered momentum as the tournament has progressed and has only recorded two bogeys since the second round of the tournament – to go with 24 birdies.

He has a good idea of what he needs to do to have any chance of beating the in-form Englishman tomorrow.

“My game plan won’t change tomorrow,” he said. “I’ll go out there and try to make as many birdies as possible.

“Jack has been playing brilliantly and I know it’s going to be a tough match. He’s a bit older than me but my age won’t count out on the course – I mean, Casey Jarvis won it last year when he was 16, so there is no reason for me to take a step back.”

For Dyer, it’s a chance to cap a wonderful summer of golf, where he has finished tie-12th, sixth and won the Proudfoot Trophy as the top qualifier for the SA Amateur.

“It’s a big 36 holes tomorrow and I’m excited about my chances,” he said. “It’s match play, so anything can happen. Things can change very quickly, so let’s see what happens.” 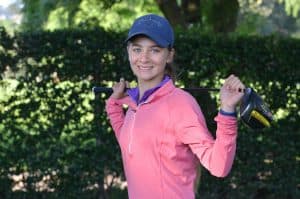 In the Flight Division, 13-year-old Zane Kleynhans will go head-to-head with 31-year-old Charlene Oosthuizen and both Pretoria golfers were brimming with delight at the prospect of playing in their first 18-hole final.

Kleynhans was made to work for her spot.

She birdied the 16th to go 2-up on Lauren Clough and pars on the next two holes was good enough to secure a 1 up win. Her semi-final match against Zara le Keur was an even tougher affair.

The Western Province golfer was 2 up through 16, but she dropped on the last two holes, and Kleynhans squared the match with two very good par-putts. The Centurion golfer holed a nine-footer to close out victory on the 19th hole. 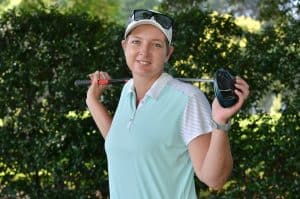 Oosthuizen, who made her debut in the SA Women’s Mid-Amateur Championship in October last year, had just one goal this year and that was to reach the match play stage.

“I just wanted to make the field this year; now I’m in the final. This is all just a huge, huge bonus,” the Waterkloof golfer said.

Oosthuizen spoiled Paola Sakota’s bid of playing the final on her home course, when she knocked out the Royal Johannesburg & Kensington junior 3 & 2 in the quarter-finals. In the afternoon, she edged Nicole Strydom from Benoni Lake with a birdie on the 16th hole to win the match 1-up.

“All eyes will be on the two big finals ahead of us and we are okay with that,” said Oosthuizen.

“It’s the first time Zane is playing in the SA Amateur Championships. It’s my first final ever in an event of this stature. We are happy to be at the back of the field. We’ll have fun, enjoy ourselves and try like hell to beat each other.”