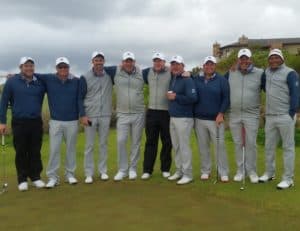 B-Section log-leaders Southern Cape is one match away from promotion in the SA Mid-Amateur Inter-Provincial at Oubaai Golf and Spa Resort; credit GolfRSA.

12 October 2017 – North West took Ekurhuleni out of the A-Section chase for glory in Thursday’s fourth round of the SA Mid-Amateur Inter-Provincial, while Southern Cape laid down a massive marker in the battle for promotion at Oubaai Golf Resort and Spa.

Ekurhuleni needed a decisive victory to keep their title hopes alive, but North West dealt the 2014 champions a stunning blow when they rallied in the singles to draw the match.

The 2014 champions took a 3 – 1 lead in the foursomes and Jaco Rall won 6 & 5 to push their tally to four points, but Gert Badenhorst, Albert Britz and Douglas Mc Cabe hit back with quick victories for North West to level the score.

Ekurhuleni edged ahead again with winds from Evan Mackenzie and Ernest Botha, but Conrad de Swardt defeated Rowan du Preez 2 & 1 to close the gap and Christo Peens ensured the draw when he beat number one Dino De Abreu 1-up.

Unable to bank two points to join Western Province in second on eight points, Ekurhuleni will be purely playing for pride against KwaZulu-Natal in the final round.

The four points gained moved the Daisies to fourth in the standings and the side will be looking for another positive outcome against North West on Friday.

Victory will come down to the tussle between Central Gauteng and Western Province, but the games point count certainly favour the log leaders.

Meanwhile time ran out for Boland. KwaZulu-Natal won their fourth round match 7.5 – 4.5 and, with a bye on Friday, Boland will be relegated at the end of the championship.

The situation in the battle for promotion is similar to the A-Section, with Southern Cape leading the log and Eastern Province the only challenger left in Friday’s final round.

However, the host union has practically sewn up the promotion and will enjoy playing the final round with the guarantee that they will make their first debut in the top tier in 2018.

Eastern Province, who had a fourth round bye, has eight points but only 34.5 games points.

Even if Eastern Province wins every single game in their final round tussle with Mpumalanga and Free State manages to score a clean sweep against Southern Cape, the Garden Route side will still triumph on the strength of their 10.5 – 1.5 victory over Eastern Province on Wednesday.

Free State drew with Limpopo, but Border also had reason to celebrate.

With a bye on Friday, the team had to win one of their two matches against Southern Cape and Northern Cape. Although they went down hard to the host union, Border edged out Northern Cape 6.5 – 5.5 to move to fifth in the log. The only way Northern Cape can avoid the wooden spoon is to beat Limpopo in the final round with a minimum of seven games points.