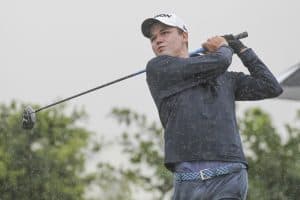 26 February 2019 – In-form Luca Filippi made it a three-way tie for the lead in the opening round of the South African Stroke Play Championship with pacesetting 66 in Stellenbosch on Tuesday.

Just a few days after winning the 36-hole qualifier at the SA Amateur Championship, the 18-year-old GolfRSA National Squad Player put on a master class from tee to green at De Zalze Golf Club and blazed his way to a share of the lead with Scottish pair Euan Walker and Kieran Cantley.

Southern Cape teenager Jordan Duminy, who also hit the headlines last week when he pushed South Africa’s number one ranked Wilco Nienaber to the brink in the 36-hole final round at King David Mowbray Golf Club was in ascendancy again.

Ben van Wyk – another Southern Cape junior – carded a 69 to tie to close out the top 10 on three-under alongside Maxmilian Hermann from Germany and compatriot Keagan Thomas.

The leading trio had an early morning start and teed off in bucketing rain. 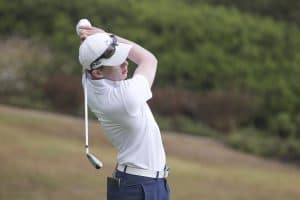 Barassie’s Walker made a fast start with birdies at the second and third holes, and started the back nine on three-under after another gain at the par five eighth. He added a brace of birdies at 14 and 15 and notched a rare birdie at the tough closing hole.

“It was pretty stressful the first few holes, trying to contend with the conditions, so I’m absolutely delighted to finish the way I did,” said Walker.

The recent Africa Amateur Stroke Play champion, who triumphed at Leopard Creek a fortnight ago, was pleased with the fast start.

“I actually hit my tee shot up against a staked tree at the second. In the absence of a rules official I played two balls – one with relief and one without. I managed to make birdie from the one with relief, and was really happy when the rules official at the green confirmed that I was entitled relief. The birdie at three carried the momentum and I settled down from there.”

The par four, 312 metre closing hole gifted only nine birdies to the 148-strong starting and Walker was delighted that an errant tee shot got him the last gain.

“I was actually stuck between the trees off the tee and it made playing to the back pin a little easier, because I was forced to play a low running shot. It ran up on to the back tier and I managed to knock the putt in for birdie.”

Milnerton’s Filippi also racked up six birdies with no losses.

“It was a tough start with the rain and you couldn’t afford to be heroic in the conditions out there,” said the Ernie Els and Fancourt Foundation member.

“I kept it steady and in play. I hit 16 greens in regulation. First we had the driving rain and then the wind pumped on the back nine. You had to stay patient and hit fairways and greens. At the two greens I missed, I chipped in for birdie and boxed a par putt at the other to stay bogey-free.” 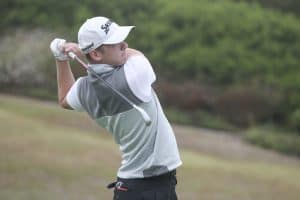 Cantley racked up four birdies on the front, but gave a shot back to the field at fourth.

He made three birdies on the bounce from 12 and eclipsed Walker with a birdie at 17, but a poor decision on par four 18th cost him the outright lead.

“I attached the pin and paid the price,” said the Liberton golfer. “I was really pleased when I got it to seven under on 17. I played it smart with an iron off the tee and I laid up. It was a sucker flag, so I didn’t go for it and just played for the centre of the green. I left myself a 40-footer for birdie and the pace on the first putt was just perfect. I watched it dribble in the hole.

“I hit a good tee shot on 18 and had 147 yards flag. I was playing really well, so I went for it, but I just tugged a wedge left and it bounced once and spun into the hazard. I made a good up-and-down for bogey but it was a disappointing finish. It was a good round overall.”

Cantley said he enjoyed yet another different kind of challenge at De Zalze.

“The three courses we played on the Africa Swing have been so different, but they are all really good courses,” he said.

“Leopard Creek was just amazing. That’s some golf course, out of this world. It’s long and you really have to think your way around it. For the SA Amateur, we had this wee, shorter course but you had to be really accurate with your tee shots with all the trees. De Zalze this week is pretty generous off the tee, but it’s a second shot golf course. You have to hit your mid-irons and your short irons in the correct positions on the greens to have a hope of holing putts.”

Duminy, meanwhile, made two at the par four 15th after pitching a gap-wedge a foot from the hole.

“I watched it spin back and drop,” he said. “At 18, I wanted to lay up, but my ball caught the bunker. It was a plugged lie, but I thought I caught it well. It hit the lip, though and dropped back. I hit the second bunker shot to two feet and made the bogey put. I was a little disappointed, but not too much. I enjoyed the course and it’s great to be back in contention. I’m having fun out there.”