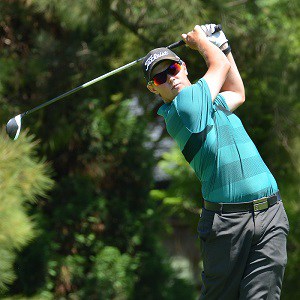 South Africa’s David McIntyre grabbed a share of the three-way tie for the second round lead in the African Amateur Stroke Play Championship; credit Ernest Blignault.

14 February 2018 – At the midway mark of the third African Amateur Stroke Play Championship, South Africa’s David McIntyre, Yashas Chandra from India and Frenchman Edgar Catherine share the lead at the top of a congested leaderboard at Glendower Golf Club.

Out in the early morning, and with a target to chase, Chandra reeled in six birdies to offset a pair of bogeys eighth in a round of 68 to finish on six-under 138.

“I hit a bad bunker shot at three and gave back the birdie at the first, but I made some good pars to keep the round going,” said the 22-year-old JWGC golfer. “At the eighth, I hit a 3-iron in from 230 yards, lagged it to four feet and holed the birdie putt.”

He birdied the next par-five (13), but dropped short 14th when he got too aggressive off the tee and pulled it well left. He remedied the situation with back-to-back birdies at 15 and 16 and hit a great approach out of the trees on the right of the 18th fairway to set up a 15-footer for final birdie.

“I’m playing nicely and my swing feels good out there,” said the Mysore golfer. “The key is to be patient; to wait for birdies, and not force it. And to keep it in play. It’s a tight course and very demanding, so you can’t let your focus drop for a minute.”

Former SA Stroke Play champion Catherine sealed a top 10 finish in the 2018 edition at Pecanwood last week. He continued a fine run of form with four birdies and an eagle at the par-five for a 68 to match the clubhouse target.

McIntyre birdied two and six on the front nine, but turned level after bogeys at three and five.

A birdie at 11 and three gains on the bounce from 13 for a 68 saw him join the frontrunners.

“I had chances over the last three holes, but it wasn’t meant to be. I’m really pleased, though, to be in the mix at the halfway-point. It’s all to play for now.”

Tucked in close behind at five-under is James du Preez, coming off a joint fifth place finish in last week’s SA Stroke Play. The Pretoria Country Club carded 70 to edge out Alex Gleeson from Ireland for fourth. Gleeson also returned a 68 that featured four birdies – two at the start of his round at 10 and 11 and two gains to finish.

South Africans Luan Boshoff and Byron Coetzee registered a pair of 69s to grab a share of sixth with overnight leader Frederic LaCroix from France (74) and Coalan Rafferty from Ireland (69).

But none of the golfers could match the round that South Africa’s number one ranked Wilco Nienaber put together.

The 17-year-old from Bloemfontein recovered from a bogey start and fired eight birdies for a seven-under-par 65 that got him back to level par after a disappointing 79 in the first round. Nienaber – whose worst finish in his last five starts was a third place finish at the SA Stroke Play – was pleased as punch.

“That got me back into the top 20 and I’m in with a chance,” he said with a wide grin. “I was striking it beautifully in the first round, but I couldn’t do anything right and when I found the rough, I was severely punished. I spent a couple of hours putting and chipping after the round until it all felt good again and everything worked really well out there.

“I never really put myself in trouble. It could have better. I was four-under on the par threes but I only birdied one par-five. Hopefully I can do better on Thursday.”

Nienaber’s 65, a 70 from Martin Vorster and a 71 from Christo Lamprecht lifted the SA Junior Team to the top of the Team Competition standings. The local juniors lead by one from Ireland and is two shots clear of France.