The weather dominates second round of WATC 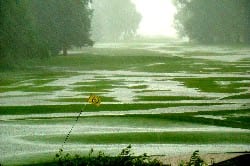 Rain and lightning disrupted play in the second round of the Eisenhower Trophy being played over two golf courses just outside Buenos Aires, Argentina. This provided for testing conditions in which good scoring was few and far between.

Denmark’s Joachim Hansen, playing the Buenos Aires Golf Club, rose above the conditions to fire a three under 69, to secure his position as the leading individual player in the championship at seven under par at the halfway stage.

With three players representing each country, and the best two scores in each team counting in each round, the Danish player’s contribution helped his team to the top of the team leader board with a second round of 141, three under par, and a thirty six hole aggregate of 280, six under par.

Of the teams that completed the second round, New Zealand was next best six shots back.

Play was first suspended just after nine in the morning, due to lightning. Some two hours later it resumed in driving rain. Play continued in these conditions to 16h52 when, due to lightning, play was suspended for the second time, to resume on Saturday morning.

“The rain is coming down really hard. These conditions are very difficult,” said Colin Burger, the South African Golf Association’s President and team manager. “Dean O’Riley’s shirt is starting to get wet through his rain gear, he no longer has a dry golf glove, it is very difficult,” he continued. This Burger explained telephonically at about the time the twenty year old Ekurhuleni golfer was playing the fifteenth hole at the Buenos Aires Golf Club.

All teams that teed off in the afternoon field, on both golf courses, are still to complete their rounds.

Nothing illustrates the challenge presented by the weather better than the performance of the French team. Overnight leaders, after nine holes, on the Olivos Golf Club layout, were four over par and were lying three shots off the pace set by the Danes.

As can be expected in such conditions, which South African players are seldom exposed to in competition, the South African team struggled. They ended the second round with a team score of 152, eight over par. This gave them a 36 hole aggregate of 299, thirteen over par. This put the team tied in fortieth place nineteen shots off the pace.

The South African team made up of Dean O’Riley (77), JG Claassen (75) and Dylan Frettelli (81) teed off first in the morning, on the Buenos Aires golf course.

JG Claassen again was the best performing South African. He managed to get himself to two under par, under the difficult conditions that prevailed, for his round, with two holes to play. He disappointingly dropped five shots on the last two holes, a triple and double bogey respectively, to finish three over par 75. The nineteen year old Orkney golfer now has an individual score of 148, five over par, putting him tied in sixty second place.

Dean O’Riley was the player whose score counted with that of Claassen’s in the team competition. Like yesterday, he played more regulation golf than his younger team mate turning in 39, three over par, made up of a double bogey, two bogeys and solitary birdie. With two consecutive bogeys on holes twelve and thirteen, he came home in 38. The Benoni Lake Club member has a 36 hole total of 151, eight over par, and is well down the individual leader board tied in ninety seventh place.

Dylan Frittelli, who played so well for South Africa in this competition in Australia in 2008, was again disappointing. He went out in 43 shots, seven over par, which included two triple bogeys. He played the back nine better, in 38, two over par. The Irene Country Club member, from Pretoria, is now tied in one hundred and forty sixth place with a 36 hole aggregate of 156, thirteen over par.

The 72 hole team competition, which forms part of the World Amateur Team Championships, will resume on Saturday morning, weather permitting.

“We are not sure as to what the International Golf Federation will do now as it is unlikely we can complete the Eisenhower Trophy as determined in the conditions of competition,” said Burger. “We might be looking at a situation in which they introduce a cut so that they can complete the championship.”

The championship is to conclude on Sunday.

2nd Round Results (play suspended due to lightning)