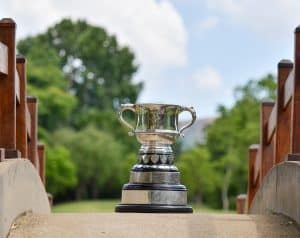 The prestigious Freddie Tait Cup is awarded to the leading amateur who makes the 36-hole cut in the South African Open Championship. Credit Ernest Blignault / GolfRSA

December 2020 – The Freddie Tait Cup is awarded to the leading amateur at the South African Open Championship, providing he survives the 36-hole cut.

The prestigious trophy commemorates Lieutenant Freddie Guthrie Tait, a St Andrews young man who won the Amateur Championship in 1896 and 1897 and finished leading amateur in the Open six times.

The cup came into being in 1928 when surplus funds from a British Amateur Tour to South Africa that year allowed the touring contingent to purchase the trophy. It bears the R&A Club die and crest, and the medal die of the Army Golfing Society.

It was decided that the Freddie Tait Cup would be awarded to the best-placed amateur in the South African Open Championship and the first man to etch his place in such history was Bernard Wynne, who won the trophy at Royal Cape in 1929.

Since then, only eight amateur Freddie Tait Cup winners accomplished the rare double – winning the championship – and South African Major champion Bobby Locke was the only player to achieve this exceptional feat twice.

Locke lifted the Freddie Tait Cup alongside the Open trophy for the first time in 1935 at the age of 17, where his three-shot victory at Parkview Golf Club also earned him the distinction as the national Open’s youngest champion. His second double came in 1937 when he claimed a runaway 11 stroke victory at East London Golf Club.

Only seven Freddie Tait Cup winners have subsequently lifted the SA Open title as professionals, with Dale Hayes the first in 1969 and Brendan Grace adding his name to this exclusive list in 2020.

The story of Frederick Guthrie Tait (1870-1900), and the trophy which honours his memory is a unique one, and adds yet another special dynamic to this fine tournament.

The Edinburgh-born Tait made a name for himself as a big-hitting amateur in his early playing days.

At just 5ft 11inches, he really turned heads at St Andrews’ Old Course in 1893, blasting a drive that landed 250 yards away, only for it to run a further 91 yards on the frozen fairway. Interestingly, 250 yards was also the exact distance his father, a physicist, had declared humanly possible in a paper published two years earlier, even though the longest drive on record (in terms of carry) at that stage was only 180 yards.

Tait broke the course record at the Old Course the following year, firing a 72.

Yet, his two victories at The Amateur in 1896 and 1898 were undoubtedly the crowning achievements of his career alongside third-place finishes in 1896 and 1897 at the Open Championship (an event in which he finished as the low amateur on six occasions).

The most legendary tale of all was a bet Tait made in 1898, declaring that he could get from Royal St Georges in Sandwich to Royal Clinque Ports Golf Club (a distance of 3.2 miles) in fewer than 40 strokes. It was an outlandish and obscene suggestion for many reasons, not least of which was the fact that the average driving distance at that time was around 190 yards. Yet, true to his character, Tait defied the odds, and achieved it in just 32 shots.

First and foremost though, Tait was a soldier, and in 1899, he boarded the Cape-bound SS Orient to fight in the Boer War as one of 29 officers in the famed “Black Watch.”

His battalion was decimated at the battle of Magersfontein in December 1899, but Tait survived a wound to the thigh, and recovered to lead his platoon at the battle of Koedoesburg Drift near Kimberley a month later. It was here that he tragically died though, suffering a fatal shot to the chest while leading a forward rush.

News of the charismatic Tait’s passing stunned the Scottish public, as his legacy had extended beyond just golf. He was buried on the banks of the Riet River, where a small cross marked the grave-site. In 1936, his putter was presented to the Kimberley Golf Club – the course closest to the point of his death (as per his request in his will).