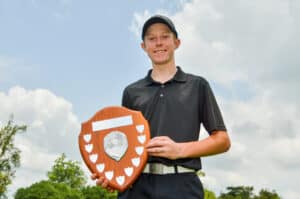 Dian Kruger from Gauteng North marched to a six-stroke victory in wire-to-wire style to lift the Nomads SA Under-15 Championship title at the Lake Club Benoni; credit Ernest Blignault.

13 January 2022 – Centurion Country Club’s Dian Kruger jumped up to No 1 in the Under-15 rankings when he won his maiden national title, the Nomads SA Under-15 Championship, in wire-to-wire fashion at Benoni Lake Golf Club this January.

The 14-year-old, who had announced himself on the scene with a tie-fourth finish in December’s Joburg Under-15 Junior Open at Glenvista Country Club, raced to a three-stroke lead when he signed for an opening round of 68 that included six birdies and two bogeys.

Inclement weather and delays saw the field struggle to post low scores in the second round.

Yet, despite dropping four shots in his last seven holes and signing for a disappointing 76, Kruger maintained his three-stroke lead on the field.

On the final day, the Gauteng North junior once again fired the day’s low round – together with Fancourt’s Dewan de Bruin – mixing five birdies with four bogeys for a closing 71 to secure an impressive six-shot win.

“To be honest, I’m feeling more relieved than anything else,” Kruger said after winning his maiden national title. “It’s never easy to hold onto a lead and I knew the pack would be chasing me hard. 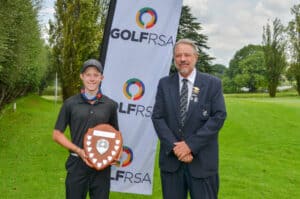 “I played nicely at the Joburg Under-15 Junior Open, but I was getting a deep with my swing, so my coach Kyle Phelan and I worked really hard on getting my swing back on plane in the break. I hit the ball really well this week and hit a lot of greens, but I left a few putts out there.

“I have been working hard to improve the technical and mental aspects of my game over the past few months and I’m so happy to see it pay off,” he said.

Oubaai’s Ryan Melville secured his best finish of the season with a runner up position, despite a double bogey on the final hole.

Strand’s Andries van der Vyfer finished alone in third a further shot back while South African Golf Development Board member Johndre Ludick from Graaff-Reinet Golf Club secured fourth on seven-over with a final round of level-par 72.

Zane Kleynhans – a finalist in the B-Division of the SA Women’s Amateur Championship last year – led the Girl’s Competition from start to finish and her rounds of 77, 76 and 78 netted the Centurion junior a share of 19th on the final leaderboard alongside Jason Ressell from North West.