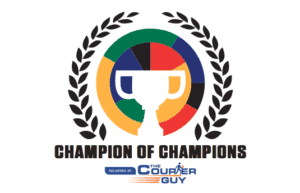 GolfRSA’s popular Club Champion of Champions Final returns to a familiar venue in October and delivered by the fastest-growing courier company in South Africa.

With a new sponsor on board in the shape of The Courier Guy, the National Final returns to Kyalami from 16-19 October, where the country’s ultimate club champions, across multiple divisions, will be crowned.

This is the fifth edition of the tournament, launched in 2017, with golfers first needing to win their home club championship, before successfully progressing through regional finals in order to earn a spot in the prestigious National Final. Winners of the 36-hole final are crowned the ultimate club champions of champions.

This year, The Courier Guy is getting behind the tournament as part of a two-year event sponsorship that will help to grow the amateur game in South Africa.

“The Champion of Champions tournament appeals to us because, although the event is open to all golfers in the country, it is only through consistently strong performances at all levels that golfers will be able to reach their final destination,” explained The Courier Guy’s head of marketing, Simon Hill.

“With 165 Kiosks and over 2 000 drivers, The Courier Guy has a huge national footprint so it just feels right we support golfers from all over the country. We also love the game of golf and everything it stands for – it’s how we like to run our business.”

GolfRSA CEO Grant Hepburn welcomed the news that The Courier Guy would be on board as the tournament sponsor for the next two years.

“Over the years the Club Champion of Champions tournament has grown into a very popular event,” he said. “And the reasons for that are simple. It’s well structured, professionally run and open to golfers of all levels. It’s also a lot of fun.

“It’s exciting to be able to welcome a progressive and exciting company like The Courier Guy as one of GolfRSA’s partners for the next two years in an event that will continue to create exciting finishes and great stories.

“We are delighted to be able to bring the tournament back to Kyalami, which proved to be such a tremendous venue last year. The course is superb and the staff at Kyalami Country Club played a huge role in making the event an overwhelming success.” 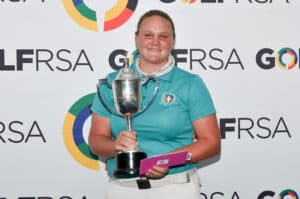 Kiera Floyd won the 2021 event, before going on to capture the 2022 SA Stroke Play Championship.

“I am extremely proud to have my name on that trophy again,” said Steenkamp. “When you think about having to win your Club Champs, then the regional final and then to beat a seriously strong field of players in the final, it is a real honour to be standing here as the GolfRSA Club Champion of Champions.”