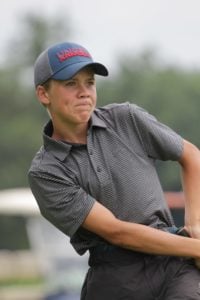 5 August 2019 – A great ball-striking display on day one at Koro Creek Bushveld Golf Estate left The Golf School of Excellence Cape Town atop a jam-packed leaderboard at the ninth SA High School Championship on Monday.

Brits from Bellville Golf Club anchored the team with a three-under 69.

South African Golf Development Board Keyan Loubser fired two eagles on his way to a two-under 70 and Bridge Fund Manager Junior Series winner Louis Loubser from Strand boosted the team with a round of 74. The fourth member of the team, Craig Jacobs, returned a non-counting 76.

TGSE will be hunting their first victory in the national team event, but the quartet will have to pull out all the stops to stave off some hefty competition.

De Villiers Graaff trail by one shot, Curro Aurora – targeting a hat-trick of wins – are three shots adrift, the Balderstone Golf Institute is four off the pace and The Afrikaanse Hoër Seunskool is also within striking distance on 220.

Brothers Angelo and Keanan Keffers – both members of the South African Golf Development Board and rising stars in Boland Golf Union’s golf development program – registered respective rounds of 70 and 73, while Jurie Mostert contributed 71 to seal second place for the 2016 champions De Villiers Graaff on two-under 214.

GolfRSA National Squad members Kieron van Wyk, Carl Mwale and Cole Stevens – all members of the victorious team in 2017 and 2018 – kept Curro Aurora’s hopes alive and the former champions are in a great position to strike after

Van Wyk led the side with a 69, while Mwale and Stevens registered rounds of 73 and 74.

Meanwhile Yurav Premlall from Glendower Golf Club took the low round honours and the lead in the Individual Competition with a four-under-par 68.

The GolfRSA National Squad member was backed up by Regan Gay and Josh de Aguiar, who posted rounds of 73 and 76 to keep the Balderstone Sports Institute in the mix on 217.

Christiaan Maas, Luhan Bester and Labuschagne pooled for 220 for The Afrikaanse Hoër Seunskool.

Dimension Data Junior Open champion Maas led the charge with an even-par 72, Bester carded 73 and Zandre Labuschagne added a round of 75. 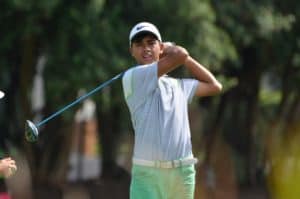 Yurav Premlall from the Balderstone Sports Institute set the first round pace in the Individual Competition with an opening four-under-par 68 in the SA High School Championship at Koro Creek Bushveld Golf Estate; credit Ernest Blignault.

The Individual Competition is equally tight, with Premlall in pole position with a one-shot lead.