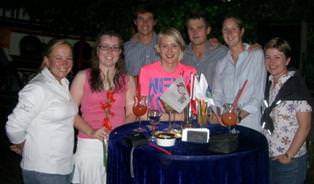 The Gloria Golf Club in Antalya, Turkey is one of the venues for the 2012 World Amateur Team Championship. It is a golf course carved out of a forest of pine trees. Where the trees have been removed pristine fairways, greens and bunkers exist.

Teeing up in the 2009 Turkish Amateur Open Championship, a 72 hole stroke play event which concluded on Sunday, for men and women, were players from over twenty countries.

For South Africa, Johan Bekker, the Ekurhuleni amateur from Benoni Country Club, teamed up with Coenie Bester, from Middelburg in Mpumalanga, in the men’s competition. Both struggled on the testing layout.

The winner was Jurrian van der Vaart, of the Netherlands, who beat Frenchman Leo Lespinasse in a play off. Both players finished on 283, five under par, three shots clear of the next best player.

South Africans Kim Williams, Ashleigh Holmes and Yvette du Plessis competed in the women’s competition which was played concurrently to the men on the same golf course.

Defending champion Ashleigh Holmes struggled all week finishing in 17th place with a 72 hole aggregate of 323, thirty five over par.

Du Plessis, who was competing in her first tournament outside South Africa, finished 21st with a score of 333.

The best placed South African was Kim Williams. She finished 5th with a score of 302, fourteen over par.

“Kim was lying second playing hole 16,” said Erica Lefson, Womens Golf South Africa President and team manager. “However she dropped three shots on the last two holes,” lamented Lefson, during a telephonic interview after the round.

“The course had been setup very long for the women,” pointed out Lefson. “This is borne out in the fact that Marieke Nivard, of the Netherlands, won the competition with a five over par score of 293. The second placed player, from the Czech Republic, Klara Spilkova, was a further six shots back.”

The charismatic Lefson certainly added a new dimension to team management. Having just turned 60, the determined President caddied for all five players at some time during the competition. During the final round, she carried William’s bag over all eighteen holes!

“Johan Bekker still suffering the effects of an injury he suffered during the SA Inter-Provincial, was taken ill before the first round. He spent the first evening in the emergency room of a local hospital. I had to caddie for him in the next day,” said Lefson.

Bekker did improve health-wise as the week progressed. Unfortunately, after the third round, he became embroiled in rather a bizarre incident. “After the round we were looking at the scores on the internet when we discovered that Johan had been disqualified for a serious breach of etiquette; Rule 33-7. The crime Bekker was alleged to have committed was striking a bunker rake after completing a bunker shot. Someone unknown to the Bekker, and the rest of the players in his group, reported this. Without consulting the player the organisers disqualified him,” said an exasperated Lefson.

“Natually we appealed there and then. None of the players in his group could recall the incident which was evidence of the fact that Bekker did not strike the rake in anger or with the intention of damaging it,” said Lefson. So by 23h45 on the evening prior to the commencement of the final round, Bekker was fortunately reinstated into the competition.

A final word from the team manager was in relation to the area around the tournament venue. “In approximately a 12km stretch there are 15 golf courses and accommodation for over 55,000 people. This is a golfers’ paradise,” exclaimed Lefson.

Well the one lesson learned here, is that 2012 World Amateur Team Championship team selectors are going to have to think carefully as to who is best suited to a golf course like Gloria Golf Club. It will certainly not be an exciting young big hitting player but more the straight hitter, the percentage golfer who can keep it on the fairway and has a good short game. An interesting time awaits the selectors…..