Depending on how you look at it, Bryson DeChambeau is either a golfing maverick who is way ahead of his time or a mad scientist who overthinks his equipment. What can’t be denied, however, is that he is an interesting fellow. Very interesting. And golf could do with a few more interesting fellows.

Forget the Hogan-style cap or the side-saddle putting that he experimented with last year, the physics major got tongues wagging most with his unusual single-length irons. The theory is that if all of your irons are the same length, then your posture, ball position and swing should be exactly the same whether you’re swinging a 4-iron,  7-iron or wedge.  Fewer different swings means greater consistency, or so the theory goes.

We asked Craig Wilson to put the clubs to the test:

The single-length concept resonated with me. It made sense that as a 12-handicap golfer (I have been down to a 7 and am told my swing is not too bad), surely generating a single swing type across all the clubs, regardless of loft, would take some of the complexities and error margins out of my swing, especially in the longer irons where I have currently been using 3, 4, 5 & 6 hybrid. Of course, it helps that I love experimenting and tinkering with golf equipment and I am willing to try most concepts that are promising to improve my gameplay. 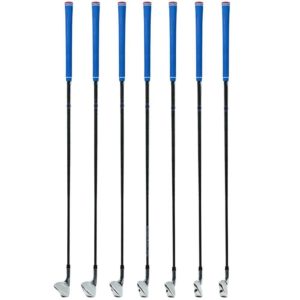 All the clubs are of 7-iron length and I’m sure that, like me, this is a favourite in most golfers’ bag and the most accurate of the mid- to long-irons. The 5 and 6 iron are shorter than ‘normal’, and the 8, 9, PW, and GW are longer. I immediately reached for the 4-iron (which was the strongest iron in this set) and gave it a few swings. It was interesting just howe much difference the shorter shaft length made – in comfort and confidence.

A worry was that a 7-iron shaft on a 4-iron loft would produce a shorter shot than the standard 4-iron, but Cobra responded to say they had addressed this issue through weighting. In other words, the shorter 4 and 5 irons have more weight in the head to make up the difference, and the longer 9 iron has less weight than standard

I went off to play a round of golf at Milnerton Golf Club, without even so much as a visit to the driving range. I was itching to get them into play in real conditions. And I wasn’t disappointed. At the outset, I had adjust my aim slightly, as I tended to push the ball a little right off my normal flight but this was easy to rectify very quickly. My brain was obviously having difficulty comprehending the shorter shaft on the “long” irons at the outset, as at first I found myself swinging too hard to try and achieve the distances. I quickly realised that it was completely unnecessary. In fact, I found myself relaxing and just swinging normally as was astounded by the results. Even better for me, was that the head on the club was amazingly forgiving, even on off-centre shots.
I won’t deny that, at first, it felt incredibly weird setting up with a 4- and 5-iron that are the length of a 7- iron. But as the round progressed, I started to really enjoy the feeling of the 4-to 8-iron and they all were flying close to the exact same distances as my normal set.
Admittedly the visual set up on the 9, PW and GW takes a lot of adjusting to. Your certainly don’t have to worry about high ball flight, but standing further away from the ball with these clubs really did take some getting used to. This was especially true of the GW from 80 meters in and for bump-and-run shots around the green. Again, it would take some getting used to and I ended up swapping out the Cobra GW for my current GW.
Long story short: my round at Milnerton ended with me shooting a 76, which was followed up with a 9-hole score of 39. I then shot a 79 at Bellville and followed it up with a 77 at De Zalze. These scores were interspersed with two mid 80 rounds and then followed by another two low 80s. My handicap has come down to a 9 within a month and I can honestly say that these clubs had a huge role to play.
I reckon I’m hooked on the one-length irons and have now taken my 4-, 5- & 6-hybrids out the bag permanently. The only hybrid that remains is my 3-hybrid.
So if you are a mid- to high-handicapper and you are in the market for new irons or just keen to get onto the Flightscope, then I suggest give these clubs a try. I think you could be pleasantly surprised.
Scroll To Top