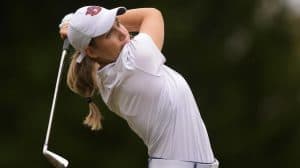 13 May 2021 – Kaleigh Telfer called three shots: a powerful drive, a 5-iron to the green and an 18-foot eagle putt on the 503-yard, par-5 ninth hole Wednesday at the Louisville Regional to advance No. 9 Auburn to next week’s NCAA Championship in Scottsdale, Arizona.

“I knew what the scores were the whole day,” said GolfRSA Elite Squad member, a senior from South Africa. “I said to myself that if Elena makes birdie, I need to make birdie, too, and we’d have a good chance of at least being in a playoff.

“When I hit my drive down the middle of the fairway and had 5-iron in my hand, Elena ended up missing her putt and I said to myself, ‘I need to make eagle, or at least give myself a chance.’

As Telfer approached the ninth green, her teammates and coaches were waiting, everyone aware of the stakes.

“We knew it was big to gain us two strokes,” said Elena Hualde Zuniga, who posted Auburn’s lowest final round score, a 2-under 70. “I was just cheering for her, sending her all of the positive energy to make that putt. That’s all I could do from the outside.”

“I hit a good putt and it lipped in,” said Ernie Els and Fancourt Foundation member Telfer.

“She hit it a little bit firm and caught the left side and in the hole, and our whole team screamed,” Luellen said. “I screamed, they screamed, we all screamed.” 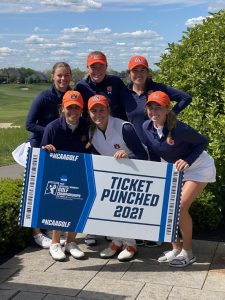 Telfer’s eagle capped a momentous comeback that saw the Tigers surge from 12th place to a tie for fourth, with the top six teams advancing to NCAAs.

That Telfer delivered with the season on the line came as no surprise to her coach.

“She just has a knack for it,” Luellen said of Telfer’s clutch gene. “She loves that position. She never gives up. I’ve seen her do it a few times. She did it at SECs when our back was against the wall. She gives herself a chance. She makes a lot of putts that length.”

“I’m always here for the team. We were all doing this for each other,” said Telfer, motivated by a 57th -place finish as a freshman at the 2018 NCAA Championship. “I didn’t want that feeling again. That feeling hovers over me all the time, so I knew if I made the putt, the team was going to be happy and I was going to be happy, too.”

From feeling the pressure to applying it.

Telfer’s eagle moved Auburn to 2-under for the day, the only school in the 18-team field to break par on the final round. The Tigers finished at 14-over, then waited while SEC peers No. 1 South Carolina and No. 17 concluded their rounds before the Gamecocks defeated the Razorbacks
in a playoff to earn the final spot.

“We knew that if Arkansas two-putted the last green, we knew we’d be in,” Telfer said. “This is what we came here for. We didn’t want to end our season at regionals. It’s exciting for us. We’re all just pretty relieved.”

Written by Jeff Shearer for AuburnTigers.com