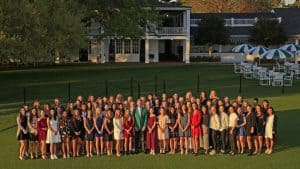 GEORGIA, United States (2 March 2019) – South Africa’s Kaleigh Telfer will share in a historic week for women’s amateur golf when she joins the most promising future stars of the game in the inaugural Augusta National Women’s Amateur today.

The annual championship – established by Augusta National Golf Club – features a world-class field of 72 players, who were invited based on their positions in the Women’s World Amateur Golf Ranking (WAGR) or performances at various recognized tournaments.

The GolfRSA Elite Squad player will join the field for the first two rounds of the 54-hole championship at the Champions Retreat Golf Club at Augusta on 3 and 4 March.

Only the top 30 will advance to the final round at the legendary host venue of the Masters, but all the participants will be able to experience the hallowed turf of Augusta National Golf Club during a practice round on Friday.

The Ernie Els and Fancourt Foundation member capped off the fall portion of the season with her first career collegiate victory at the Battle at the Beach in San Jose del Cabo, Mexico. 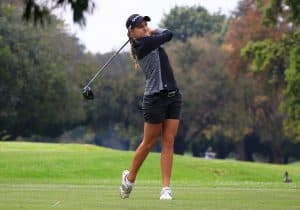 Her five-under total helped the Auburn Tigers cruise to a 17-stroke victory, the program’s first team win since 2014, and that was preceded by an individual third-place showing at the Alexa Stirling Intercollegiate.
During the South African winter last year, Telfer was a finalist in the prestigious South African Women’s Amateur Match Play Championship. She has also represented South Africa in the 2016 and 2018 World Amateur Team Championships, two Toyota Junior Golf World Cups and the 2014 Youth Olympic Games in Nanjing, China.

Telfer will start the first round alongside Sophie Hausmann from Germany, a three-time first-team All-Big Sky honouree, and Canadian Brigitte Thibault, whose best finish this season was second in the Las Vegas Collegiate Showdown.

“This is a momentous occasion for women’s amateur golf,” Greasley said.

“It is almost unimaginable that Augusta National will crown a historic first woman as a tournament champion right before the start of the 83rd Masters. I believe this event will boost women’s amateur golf, especially among the juniors, in tremendous fashion and it is a huge honour for GolfRSA and Womens Golf South Africa to have one of our own compete in the first Augusta National Women’s Amateur. Kaleigh was our country’s first golf Olympian and it’s poetic that she will also have the honour as the first South African woman to compete in this prestigious event. We are all incredibly proud of her achievement and wish her great golf this week.”

World number six Jiwon Jeong of Korea, runner-up at the 2018 US Women’s Amateur, is the highest ranked international player in the field.

Alexa Pano, aged 14 is the youngest player in the championship.

A total of 25 countries will be represented at the championship, with the United States leading the way with 31 participants. Sweden will field six players, Italy four and England and Thailand three each.

Slovenia’s Ana Belac, Sofia Anokhina from Russia and Malaysia’s Hee Ying Loy are the first golfers in history from their respective countries to have received invitations from Augusta National Golf Club.

The champion will receive a stunning sterling silver and gold vermeil trophy, designed in collaboration with Tiffany & Co, as well as invitations to the next five championships, providing she keeps her amateur status.

In addition, the winner will also be exempt to compete in the 2019 US Women’s Open and Women’s British Open, as well as any USGA, R&A and PGA of America Amateur Championships for which she is eligible for one year.

Four legends of the women’s game and icons of many of the participants – Hall of Famers Annika Sorenstam, Nancy Lopez, Se Ri Pak and Lorena Ochoa – will be on site to inspire the rising stars during the championship, the first tee ceremony and other functions.

Sweden’s Sorenstam, one of the most successful players in the history of LPGA with 10 major titles, was confident the reward of playing at Augusta National Golf Club will become a strong source of motivation for the young golfers.

“This championship is fantastic for women’s golf, and I know young girls are going to be energized and motivated by seeing this event unfold for years to come,” said Sorenstam.