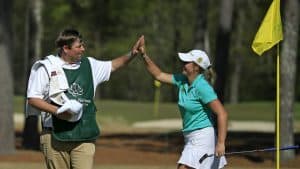 Kaleigh Telfer from South Africa celebrates with her caddie Andrew Pratt on hole 9 during Round 1 of the Augusta National Women’s Amateur.
Credit Chris Trotman / Augusta National.

AUGUSTA, Georgia (3 April 2019) – South Africa’s Kaleigh Telfer mixed it up with the world’s top ranked amateur and the 2018 SCFA Women’s Amateur Championship runner-up in a dream start at the inaugural Augusta National Women’s Amateur on Wednesday.

The GolfRSA Elite Squad member fired four birdies in an opening round of three-under-par 69 at the Champions Retreat Golf Club to finish within one stroke of joint leaders, number one ranked Jennifer Kupcho and 16-year-old junior Zoe Campos.

“I am very happy with that 69,” said the second-year Auburn University student.

“I started off nervous and missing greens, but making a lot of putts and then, towards the end of the first nine and on the back nine, I started hitting the greens and the putts kept dropping. It was a good round.”

Kupcho returned a flawless 68 with birdies at eight, 14, 15 and 18, while her compatriot Campos countered bogeys at eight and 16 with half a dozen birdies.

“I actually hit a good drive down the middle of the fairway at the fourth,” said Telfer.

“There’s a tree in the middle of the fairway, and I hit a punch shot and it came out a little bit high off the face. I thought it was a good shot, but it hit the tree at the last minute and fell through.

“The seventh is a driveable par four, but in the practice round, I hit 3-wood long. I was hitting it quote long again today, so I went with a 5-wood. I finished 10 yards short of the green and made a great up-and-down for birdie. 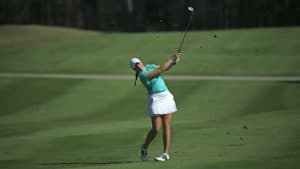 “My caddie (Andrew Pratt), who is the associate head golf coach at Auburn, said to me we should finish strong at the par five, so I hit it to about 15 feet at the ninth. He gave me a great line and I made it. Coach has a friend who is a member at Augusta and he gave us a few tips, and that worked out nicely for us.”

The former Ernie Els and Fancourt Foundation member was delighted to receive the unexpected call-up to Augusta and was pleased with a solid start.

“Honestly, I wasn’t expecting the call,” she said. “The selections had gone out and I thought I had just missed it. I knew I was very close, so when I got the call about two weeks later, I was just over the moon. I received the phone call while I was walking to class and I was really excited.

“It was a huge motivation to come out here and I had a few college tournaments leading up to this week that helped me to build my confidence coming here. This is one of the best tournaments I’ve ever played in.

“This was definitely the kind of round that I was looking for. My goal was anything under par and it’s always nice to start with an under-par round. Going into tomorrow, I’ll just do what I did today and see how it goes.”

Telfer described the opening function as an out-of-body experience.

“It was incredible, every moment from arriving to the fireworks to going back to our accommodation,” said the Bryanston golfer “I had goose bumps the entire night. Experiencing the history and everything that surrounds Augusta National is incredible and I feel so very honoured to be here. And it’s really great to share this experience with my coach and my parents.”

Written and released by Lali Stander on behalf of GolfRSA. With thanks to Joy Chakravarty for his assistance  with Kaleigh Telfer’s quotes.