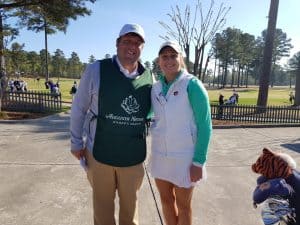 5 April 2019 – Tough scoring conditions got the better of South Africa’s Kaleigh Telfer in Thursday’s second round of the Augusta National Women’s Amateur, who had to battle her way into the final round field in a sudden-death play-off.

The GolfRSA Elite Squad member began moving day in third on three-under, but struggled to manage her game in the windy conditions and tougher pin positions. She carded a 76 to finish on three-over, which landed her in a fight for survival in the 21st position with 10 other players.

In the ensuing play-off for the last 10 spots for the top 30, Telfer made a superb up-and-down for par at the first extra hole – the par four 10th – to book her place for the final round at Augusta National.

“I had a really up and down day,” Telfer said.

“I spent a lot of time at the beach, going bunker to bunker and making some great par saves on the front nine and dropped a couple of shots coming home. I had a birdie chance at the last hole, but I missed the putt and had a stressful wait to see where the cut would fall.

“I was really calm teeing it up in the play-off and I hit a great tee shot, The second shot was a little confusing with the wind. I went with a 7-iron instead of a 6-iron and came up short of the green, but I managed to chip it close and make the par to get through.

“I was honestly disappointed with my performance, but I made it and that’s what counts. Now we push the reset button and start with a clean slate at Augusta National. I am so excited to get there. Looking forward to a productive practice round on Friday and the final round on the weekend.”

Womens Golf South Africa President Sally Greasley had a birds’ eye view of the action at the Champions Retreat Golf Club on Thursday.

“Kaleigh was not on her game and right from the start, she leaked her drives left and right. It was a scrambling round, but she made unbelievably good par saves to keep her round going,” Greasley said.

“The front nine of the course is relatively flat and benign, but there were some true sucker pins that made it extremely hard to try and position oneself for a one putt.  The back nine is definitely the more difficult loop with lots of hills and valleys and raised greens, surrounded by bunkers.

“As we turned, the breeze intensified and it was really tough to judge as the course is lined with pine trees that funnel the wind and affects the speed.

“Kaleigh’s drive went right and finished on the bank of the creek at the 15th hole. The left-side was marked as a penalty area, but the right-hand side not and this meant a return-trip to the tee box and a very difficult approach over the creek into a very narrow green. She also bogeyed 16 and 17, where she left herself on the right of the green at the par three with no chance of making an up-and-down to save par.”

Telfer missed birdie chance at the par five 18th meant a nail-biting wait for the Auburn University student and her family.

“Kaleigh’s mom Catherine and I sat and watched the leaderboard on 18 while she kept warm and it was almost more stressful than watching her play,” Greasley said.

“Kaleigh was relieved to be drawn in the first three-ball in the ensuing play-off. She split the fairway with her drive, but her approach landed just short of the green in the little valley to the right. She hit a brilliant chip to six foot and made the par putt.

“When one of her playing partners, Alessia Nobilio from Italy, bogeyed the first play-off hole, we knew Kaleigh made it. She was extremely disappointed with her game, but we reminded her that she came to qualify for the final round and she reached her objective. We are all looking forward watching her make history with 29 other players on Saturday. Imagine being the first female players on the hallowed turf of Augusta.

“The buzz around this ground-breaking tournament is indescribable. Everywhere I’ve gone, wearing my GolfRSA jacket, I’ve been approached by people who are so excited, boasting about their tickets and being part of this historic event. It’s really a huge deal and we are so proud to be flying the South African flag here this week.”

World number one Jennifer Kupcho will lead the 30-strong players’ field at Augusta National on Saturday. The 21-year-old carded a one-under-par 71 to hang on to a one-stroke lead on five-under.