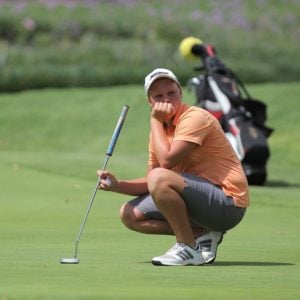 Kiera Floyd has the opportunity to become the youngest winner of the Sanlam South African Women’s Stroke Play, when the championship tees off at Port Elizabeth Golf Club from 22-24 April 2018; credit Sunshine Ladies Tour.

The 13-year-old from Benoni will spearhead a vast group of young, up-and-coming juniors hoping to make their mark at Port Elizabeth Golf Club from 22-24 April.

“It’s never good to get side-tracked during a tournament,” said Floyd, who tied for 2st in her debut at Wanderers last year. “It would be a great record to have, but I’m going to take it shot-for-shot, hole for hole. If I pull it off, we can talk about it. But it’s a strong field and a tough course. We’ll see how it goes, but I’m just really excited to play in my second SA Stroke Play.”

“Kiera definitely has the x-factor,” said Williams, who played with Floyd during the final round of the Joburg Ladies Open at Modderfontein Golf Club, where she tied for 18th. “I was impressed with her golf course management and the way she plots her way around the course.”

Like Floyd, Garcia plays out of the Grant Veenstra Golf Academy at Ebotse. The Dimension Data Challenge winner described Floyd as a future star in the making.

“Kiera strikes the ball so pure, her work ethic is impressive and she has a maturity on the golf course well beyond her years. With a bit more experience, she will start winning on the senior circuit very soon.”

Floyd, who drives it a whopping 240 metres, put on a master-class in proficiency in the Bridge Fund Managers Junior Series event in February.

One of seven girls in the 74-strong field to tee it up at Royal Johannesburg and Kensington, Floyd fired a seven-under-par 65 at the newly-revamped East Course to win by one stroke, becoming the first girl in the series to beat the boys for victory.

“Kiera hits the ball a land-mile and she hits it straight. Her short game has come on in leaps and bounds since last year. I won my first SA Amateur double at the age of 14 and I wouldn’t be surprised if she broke my record.”

Floyd forego the chance to contest for a spot in the US North and South Junior in the Bridge Fund Manager Junior Series North Final at Royal Johannesburg and Kensington on Sunday to start the title chase in Sanlam SA Stroke Play Championship.

And she has arrived in Port Elizabeth with good form. She recently rose to seventh in the Junior standings following back-to-back runner-up finishes in the Gauteng North Junior Girls Open in February and the highly-contested Nomads SA Girls Rose Bowl Championship last month.

“You will definitely have to be on your game, because the forecast predicts a lot of wind,” she said. “Port Elizabeth is a tree-lined and you have to keep it play. That can be tough to do with the wind coming through the trees. But if you can stay out of trouble, you can score. Hopefully I can put together two good rounds to put myself in contention for the final round.”

Floyd represents the emerging breed of young stars primed to become a dominant force in the game.