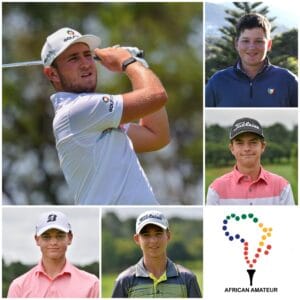 GolfRSA National Squad members Christiaan Burke and Daniel Bennett, as well as Pascal Gunther, Hannes Strooh and Joshua Koekemoer will make their debut for South Africa in the African Amateur Stroke Play Championship at the magnificent Leopard Creek in February.

The quintet has been named to the GolfRSA Senior and Junior Protea teams that will represent the country in the 54-hole team competition that will be played concurrently with the first three rounds of the 72-hole international stroke play championship from 14 – 17 February.

“Casey is the only member from the victorious senior side who won the team competition in 2020 to return for duty. Christiaan (Maas) and Jordan graduate from the junior team that gave chase and finished second two years ago, and it will also be the first time Christiaan tees it up in a senior side.

“We are delighted to reward Christiaan Burke with national colours, following his breakout season in 2021 during which he racked up three provincial titles and a string of top-five finishes that saw him vault to fourth in the Open Amateur rankings.

“We are also very excited to see our leading four Under-19 amateurs in action at Leopard Creek. This quartet has been impressive over the last 12 months, and thoroughly deserve this honour. We know all eight amateurs will embrace the opportunity and represent South Africa with pride.”

Bennett rose to the top of the GolfRSA U-19 Rankings late last year with his double success in the Nomads SA Boys U-17 Championship and the Dimension Data Under-19 Junior Open at St Francis Links.

Second-placed Gunther – the runner-up in the inaugural Pawpa Sewgolum Cup in association with Nomads in January – was equally impressive with three top-five finishes last year.

Reigning Nomads SA Boys U-19 champion Strooh sits in third place and Koekemoer moved into fourth spot after powering to a four-shot victory at the recent Nomads National Inland Order of Merit event at Benoni Country Club earlier this month.

“The impact of the COVID-19 pandemic meant that it has been almost two years since our top-ranked amateurs represented South Africa, and naturally there is a lot of excitement in both camps for the upcoming African Amateur,” said Nel.

“All eight golfers hold positions in the top five of the Open Amateur and Under-19 Rankings and have performed consistently well at home. We are confident that we are sending two very strong teams in to bat for South Africa.”

Since the African Amateur joined the South African swing in 2016, the event quickly became a popular stop on the international calendar.

GolfRSA CEO Grant Hepburn is delighted that almost 30 international players will tee it up at Leopard Creek this year.

“Over the first four years of the event, we witnessed some fantastic battles, and we crowned four South African and two international champions,” he said.

“Due to COVID-19 pandemic, only a handful of international players made the trip to South Africa last year, and we had to move the event to Glendower for health and safety reasons. Despite the travel restrictions levied against South Africa late last year, it is heartening to see so many players from abroad back to support the championship.

“International competition plays an important role in the development of our amateurs, and we are thrilled that we can once again give our golfers the opportunity to compete against, and to gain invaluable experience against, top international talent.

“We also applaud the selection committee. They have named eight in-form golfers to fly the flag for South Africa, and I am confident that these teams will do us proud at Leopard Creek.”