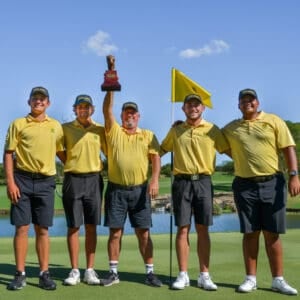 The Team Competition is played concurrently with the first three rounds of the stroke play tournament, with three scores to count in each round.

“It was brilliant, absolutely brilliant,” said the team’s manager, South African Golf Association Acting Vice-President Deon Nel, who himself also donned the green and gold for the first time. “What this team accomplished was way beyond my wildest expectations.

“These are a bunch of immensely talented youngsters who treasured the Protea on their chests, and really played for each other and their country. We knew it’s a team effort and not every day is going to be a great day for everyone. It’s a chain with a couple of links; today this one is strong, tomorrow it’s another player. At the end of the day, the team came out on top. We are so proud of them.”

Matthew Bramford, Tariro November, Michael Wallace and 2021 Nomads SA Boys U-17 champion Keegan Shutt teed it up for Zimbabwe, who finished on 722 in sixth place.