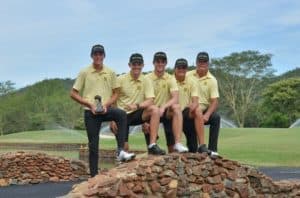 5 February 2020 – Team South Africa stormed through the half-gap given them by Team South Africa Juniors on Wednesday to race to a five-stroke victory in the Team Competition of the Africa Amateur Stroke Play Championship being played at Leopard Creek Country Club.

Together with England, Kyle de Beer’s men – Martin Vorster, Casey Jarvis and Samuel Simpson – were staring down the barrel of an eight-point deficit on the SA Juniors after 36 holes.

Then, the player of the tournament up to that point, Ryan van Velzen stumbled with a sextuple-bogey six on the seventh and the pressure was on.

On a tough day – tight pin positions, tees set back and a swirling, gusting wind up to 30 km per hour making club selection something of a lottery – Jarvis and Simpson made experience and skills count with a pair of two-under-par 70s.

Theirs were two of the best rounds of the day, and taken in conjunction with Vorster’s four-over 76, they exploited the opportunity with relish as the best of the SA Juniors was a two-under 70 from 2019 North and South Junior champion Tyran Snyders.

Van Velzen slumped to 11-over 83, but such was his dominance in the opening two rounds that he still shared the 54-hole lead in the individual 72-hole tournament with Vorster at three-under-par.

The pair holds a two-stroke edge over reigning Amateur Champion James Sugrue of Ireland, who endured woes of his own in the third round with a triple-bogey six on the 16th setting back his charge for the lead. 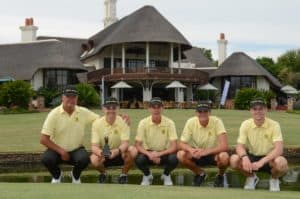 Team South Africa carded rounds of 216, 212 and 212 to celebrate a five-stroke victory in the Team Competition at the African Amateur Stroke Play Championship at Leopard Creek; credit Ernest Blignault.

Team Ireland was able to edge ahead of England for third place in the team contest thanks to Sugrue, Tom McKibbin – who was impressive in his third round at one-over 73, and Caolan Rafferty, whose one-under 71 included an unlikely hole-in-one at the par three 12th.

Rafferty’s second ace of his career in tournament play came from a pitching wedge from 145 yards.

“I got the yardage, picked a club, and tried to hit a shot,” he said. “It was one of those funny ones. I didn’t really catch it and turned away in a bit of disgust. As I was turning back, I heard my playing partner telling it to go in, and I was like, ‘Sorry, that can’t be right!’ And as I turned round, it just disappeared!”

It was a bright spot in his round and helped him to one of just seven under-par totals on the day. He made the ace, two birdies, a bogey and a double-bogey for a scorecard that looked relatively clean compared to some.

“That just rattled me for the rest of the round. I didn’t really know what was going to come when I hit it. It was like a lucky packet,” he laughed.

Voster also found conditions tough, but he kept himself in the game as he made three birdies in eight holes coming home to offset the three bogeys and two doubles. “It was a grind today,” he said. “I actually hit the ball pretty well, but some shots just didn’t go my way and I ended up making doubles. In the conditions, I’m happy with the way I actually played.”

Like many of the overseas players, Sugrue found conditions made playing well difficult.

“It was also extremely warm,” he remarked after his round of six-over 78. “The course was playing very tough and there were some very cheeky pin positions. Probably not as tough as my score suggests, because I didn’t play great. Birdies were hard to come by, and I only made one today compared to about eight yesterday.”

Jarvis is one stroke behind Sugrue in fourth going into the final round, and Simpson shared fifth with Great Britain’s Olly Huggins who carded a level-par 72, Rafferty and Duminy.

“I’m very proud of the boys,” said captain De Beer, who was a last-minute call-up after former number one Jayden Schaper joined the paid ranks at the Sunshine Tour’s Limpopo Championship.

“We overcame a huge deficit and we were quite dominant in the team side of things today. It’s a tough stretch to finish on that back nine, because conditions were so tough and that makes the win that much more special.”

Written by Mike Green and Lali Stander and released on behalf of GolfRSA.