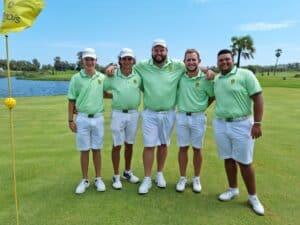 A proud moment for Team South Africa after their victory in the 2022 Africa Region 5 Tournament in Angola; credit GolfRSA

“We were really determined to step it up after being given the opportunity to play international golf for the first time since 2020,” said elated skipper Christiaan Burke.

“It was important to all of us to continue our country’s winning record in this event, and we are incredible proud of the way we performed to get the job done.”

Reigning Africa Amateur champion Casey Jarvis and new cap Jonathan Broomhead, the 2022 South African Stroke Play winner, laid the foundation for the team with rounds of level par 72 at the Mangais Golf Course to lead the first round of the 54-hole Stroke Play Qualifier.

Burke’s 73 saw him finish in third, while Jordan Duminy tied for seventh with a 78.

“In the second round, Casey and Jordan both were the only two players that broke par. Casey’s 69 moved him into sole first on three under, while a huge effort from Jordan lifted him to third on three over. Jono posted 73 to finish in second on one over. I didn’t have a great second round, and shot 77 to finish in fourth,” Burke explained.

“We had a team meeting and our collective goal for the final round of the qualifier was to try and finish in the top four. It was a really proud moment for the team when we achieved our goal.”

Burke placed fourth on seven over with a closing 73, Duminy sealed third on six over with a 75 and Broomhead’s 75 secured the team the second place on four over.

Jarvis blazed the course with a scorching six-under-par 66 in the final round to lift the Individual title wire-to-wire style on a winning score of nine-under-par 207. “It was pretty special to be the only player to finish in red numbers,” Jarvis said.

“I just loved the course. The layout suited my eye, and once I adjusted to the slower greens, I found my pace and rhythm. I’m really proud of the guys and our performance in the qualifier. We set out to get a 1-2-3-4 finish and it felt really good to pull it through.”

With three scores counting in each round, Team South Africa was seeded at No 1 for the final round Match Play with their winning aggregate of 428.

“Zimbabwe finished second on 464, which meant we would face our neighbours on the final day,” said team manager Heinrich Lourens. “The guys understood that everything they had done up to that point was moot. To lift the Africa Region 5 title we had to beat Zimbabwe in the Match Play and so we were essentially starting from scratch.

“Christiaan and Jordan had a relatively easy 7 & 6 win in their Betterball Match against Rasheed Mohamed and Sibanda Clifford. Jono had a tougher match against Tariro November, Zimbabwe’s top finisher in the Stroke Play Qualifier, but he triumphed 3 & 1.

“Casey faced Zimbabwe’s No 1 Michael Wallace, and it was a humdinger of a match. They were all square coming down 18, but Casey hit a massive drive to set an eagle chance for the win. I can’t even explain the excitement around the 18th green when he holed that eagle putt to win 1-up. It was a really great moment for the team, who had worked so hard to get the job done.” 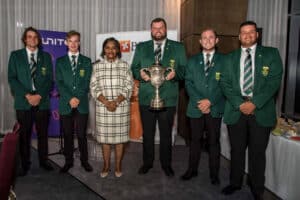 Team South Africa had safeguarded the country’s proud record with the 3 – 0 victory to lift the title for a 24th time since the country’s re-admittance to the event in 1995.

“This team really represented South Africa with pride, on and off the golf course. They were great ambassadors for our country, and it was an honour to travel with these four GolfRSA National Squad stars,” Lourens said.

“We want to applaud the Angola Golf Federation for hosting a very memorable Africa Region 5 Tournament. They went above and beyond to ensure a smoot and well organised event. From our accommodation to the transport to the excellent golf course they presented us with, they left no stone unturned, and I speak for all the teams when I commend them on an excellent tournament.”

For Burke, the chance to captain the GolfRSA Proteas in his second appearance in the green and gold, was equally memorable.

“It was a huge honour for me to captain the side, but all credit to Casey, Jono and Jordan. Everyone on the team played their part to ensure the win for South Africa. We all stepped up to make sure we secure the win, and we are so proud that we could bring the trophy home.”