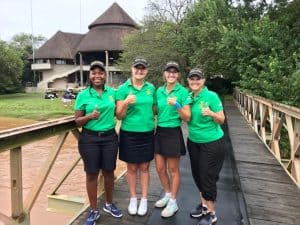 Fellow Ernie Els and Fancourt Foundation member Larissa du Preez returned a two-over 73 to give the defending champions a second round two-over 144 total on Wednesday.

South Africa, chasing a seventh successive victory in the prestigious biennial event, leads the Team Competition on 284, and will carry a 46 stroke lead into Thursday’s final round. Eswatini held on to second place with rounds of 163 and 167, while Zimbabwe sits in third on 338 after successive rounds of 169, eight shots adrift of the host nation.

“I am very pleased with the way the team has managed this challenging Bushveld course,” said Womens Golf South Africa Vice-President Sarah Braude.

“Designed by Phil Jacobs, the Nkonyeni course is an absolute jewel. The Ngwempisi River meanders through the course and one can easily get distracted by the beauty on every hole. Every hole is memorable and, with significant elevation changes and pot bunkers protecting the greens, course management is essential to scoring well.

“The overnight rain over the last two days has left the greens slightly slower, but still enormously challenging due to their undulating design.

“Our new cap Larissa led the team with a one-under 71 on day one, and Zethu played superb golf to post the low round of the tournament on day two. Sarah Bouch, who carded 72 in the opening round, made a spectacular birdie on the 16th on her way to a 76 today. The team spirit is something really special and the players are focused on defending the trophy going into the final round.”

Myeki had a few frustrating holes before her putter caught fire.

“I hit a gap-wedge at the second to six foot and missed the putt and three-putted the par five (third) for bogey and I thought I was in for another long day with the putter,” said Myeki.

“I made a great par save at the fourth and making that 10-foot putt gave my confidence a boost. I dropped on the eight, but at the ninth, I hit a grip-down pitching wedge from 117 metres and pitched it close for another birdie.

“I started the back nine with three straight pars, and made great putts for the birdies at 13 and 14. At the 16th, I pushed my tee-shot right and ended up with an unplayable when my ball lodged in the rocks. I overshot the green with the approach, chipped it short and two-putt for bogey.

“At the 17th hole, I hit my tee shot down the middle. I had 88 metres to the pin and hit a sand-wedge to six feet. I made the birdie putt to go three-under. Unfortunately I couldn’t capitalise on a great tee shot at 18 and a good approach. I had a birdie putt of 10 foot and it lipped out.

“I’m really happy with how I played today, My driving and iron-play was good and the putter came to the party. Hopefully I can keep it hot for the final round.”
Du Preez from Silver Lakes once again battled with the short irons and wedges.

“I made my first birdie at the par four 13th, and finally hit a gap-wedge stiff at the last hole to box a birdie putt,” said Du Preez.

“I hit my driver so well and it was definitely the best club in my bag,” she said. “I never missed a fairway with the driver, but my pitch shots were lacking again, especially from 100 metres in. It meant not getting near the holes, which meant not making birdies. Hopefully I can be more accurate in the final round.”