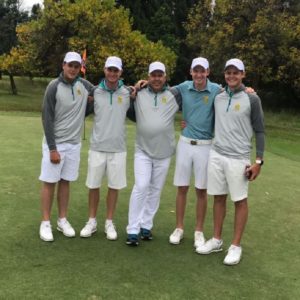 Matt Saulez from KwaZulu-Natal put the team on the front foot at Chapman Golf Club when he defeated Zimbabwe’s David Amm at the second hole of a sudden-death play-off to win the 18-hole stroke play qualifier.

Zimbabwe A finished second and the country’s B-team third, with Swaziland in fourth place. The other participating countries included Uganda, Malawi, Namibia and Botswana, respectively fifth to eighth in the final seeding.

The South African team made a strong start, beating Botswana 3 – 0 in round one and scored a clean sweep against the host nations’ B-side to book a date with the Zimbabwe A-team in the final.

“It was down to Matt and Malcolm to win it for us in the foursomes against Tafadzwa Nyamukondiwa and Thompson Masiya,” said team manager, Western Province Golf president Henk Smit.

“Both won their singles in round one and they beat Zimbabwe B in the foursomes 6 & 4 in round two, so we counted on them to pull off another winning performance. They didn’t disappoint, taking the match 3 & 2.

“South Africa’s is often described as Africa’s continental giants, but the competition keeps improving and this year’s event was very tight. There was a lot of pressure on this quartet to win this event for a 22nd consecutive time. All credit to them for doing the country proud, both on and off the course, and for maintaining the country’s proud record in the Africa Region V.”