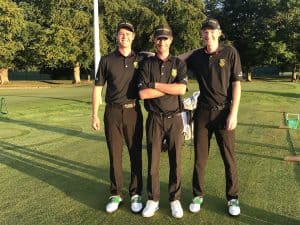 Wilco Nienaber, a healthy Malcolm Mitchell and Matt Saulez on day three of the Eisenhower Trophy at the World Amateur Team Championship in Ireland; credit GolfRSA.

MAYNOOTH, Ireland (7 September 2018) – A couple of setbacks left Team South Africa on the back foot at the World Amateur Team Championship, but the feisty trio rebounded in Friday’s third round at the O’Meara Course to rescue their Eisenhower Trophy campaign in Ireland.

Having lost Jovan Rebula to injury on the eve of the event, Matt Saulez and Wilco Nienaber had to go it alone in the second round after alternate Malcolm Mitchell was struck with a stomach bug. The pair posted rounds of 143 and 151 to start the third round 24 shots behind 36-hole leaders New Zealand.

Taking a full team, a good dose of self belief and positive attitudes to the course was just what the doctor ordered.

South Africa’s top ranked Nienaber fired a five-under 68 and number two ranked Saulez carded 69 for a total of nine-under 137 that propelled South Africa to joint 32nd with Portugal on five-under 431.

Overnight leaders New Zealand shot a total of 134 to extend their lead to three shots over Spain and the Kiwis top the pile on 30-under-par 404 heading into the final round.

The local heroes might be out of the title race, but they want to finish the week with another strong performance in Saturday’s final round at the Montgomerie course.

“It was really good to have a positive vibe in the team again and the scores reflected what having three healthy players on the course meant to the lads,” said non-playing captain Eden Thompson.

“Matt and Wilco both played great golf. Some basic errors, but they posted pretty good scores. They both felt they left a few out there, but it was a turnaround from the first two rounds.

“Malcolm played really good golf considering the ordeal he has been through and carded a 74. He was slightly flat towards the back of the second nine, but you wouldn’t have said so looking at the card, the scores or the way he hit the ball.

“It might be too little, too late, but the guys will take on the Montgomerie on Saturday with a little bit of a score to settle. We said good-bye to Jovan last night, who flew back to college in the States. We were all a little sad to see him go, but we are thankful to the South African Golf Association for giving him the blessing to return and to seek medical attention at college.”

Nienaber started with two pars, but dropped a shot at the par-four 12th.

“I made a great bogey and that was just the boost I needed to get firing,” said Nienaber, who bounced back with birdies at 13 and 15 to turn one-under. “I hit a snap-hook off the tee with the weirdest shot I’ve ever produced. The ball hit a tree and finished a foot from the out of bounds wall.

“I had to play out left-handed and the ball moved about 10 metres. I had 280 flag and took 3-iron. The ball ended up in front of the tree and I hit a 50 metre flop-shot that shot 20 metres high. It landed six feet from the hole and I boxed it for bogey.”

The 18-year-old Bloemfontein golfer fired five birdies and an eagle on the back nine to cancel a bogey at three and a late double bogey at eight.

“Six was another driver, 9-iron and two-putt birdie. At eight, I drove it front edge, but I hit the first putt too hard to a back flag and the ball took the slope and rolled off into the rough. I chipped it to six feet past and missed the return.

“I was really happy with the birdie finish. I had much better rhythm and I hit more fairways, giving myself chances to attack the pins. Just hoping for more of the same on Saturday.”

Saulez was flawless over the 16 holes. He turned two-under with birdies at 13 and 15 and erased a bogey at eight with further gains at four, six and nine.

“I played really solid golf today and I only missed two greens all day,” said the 21-year-old Durban golfer. “My driving was solid, hence I had a lot of birdie opportunities.

“At 13 I hit driver and had 50 yards in. I hit it to 10 feet and made the putt. The 16th is 166 yards downhill. I hit 9-iron 25 feet past the flag and holed a nice long putt.  Four and six were easy birdies on the par threes. At the last hole, I hit driver down the middle. I had 66 yards out of a bad lie, but I got a decent shot away that landed about 20 feet from the hole and I drained the putt. My bogey at eight was one of the two holes where I missed the fairway. I left the second shot short, chipped it up to eight feet and missed the cup on the low side.”

Mitchell was delighted to be back at full strength.

“It’s been one hell of a roller coaster ride since I left South Africa on Tuesday,” said the Kloof golfer.

“Today I was a little flat over the last couple of holes, but I shot two under on the back, which I was very happy about. It was a great honour to get the call up, but a very quick one, but I am extremely happy to be out here competing with Matt and Wilco.”