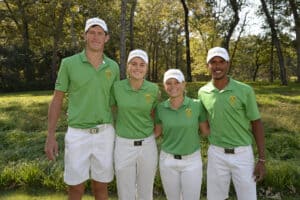 8 November 2021 – Christo Lamprecht and Kieron van Wyk beat 19 countries for the lowest round on the final day of the 2021 Spirit International Amateur Championship, boosting Team South Africa to an eighth-place finish in Texas.

Lamprecht and Van Wyk, together with fellow GolfRSA National Squad members Caitlyn Macnab and Kaylah Williams, flew the flag for South Africa in this prestigious biennial event, which drew 80 of the world’s top ranked amateurs from 20 countries.

The “Olympics of Amateur Golf” boasts five concurrent competitions, and to afford the competitors the opportunity to gain World Amateur Golf Ranking points this year, the 2021 format was adapted.

Sweden finished in third on six-under, France fourth on two-under and England rounded out the top five on even-par. Switzerland secured sixth on three-over, Argentina was seventh on six-over and Team South Africa posted rounds of 218, 223 and 216 to take eighth spot on nine-over 657

Lamprecht and Van Wyk carded disappointing earlier rounds of 149 and 150, but the pair went deep in their final push at Whispering Pines Golf Club.

The course was playing harder and faster than at any point during the week, but Van Wyk got off to a hot start with three birdies on the bounce from the 10th on his way to a three-under-par 69. Lamprecht responded with six birdies en route to a four-under 68 and their total of 137 saw the pair place fifth overall in the Men’s Team Competition.

Lamprecht, in his second season at Georgia Tech, also took fourth in the Individual Men’s Competition on two-under with his rounds of 71, 75 and 68.

“There are so many positives to take out of this week,” said the former SA Amateur champion, who is also the country’s highest-ranked player in the Golfstat NCAA Division 1 Rankings (No. 44) and the Golfweek/Sagarin ratings (No. 54).

“I didn’t hit the golf ball really great, but I managed to grind it out and just chip and putt really well,’ said the George golfer. “Kieron played really, really well tee to green and led us off with the hot start and we bounced off each other. I’m happy with my game and my overall performance and proud to have represented South Africa at this level. We’ll start prepping for a Spring Season soon, so it’s great to go back to Georgia Tech on the back of a solid performance.”

The Ruimsig golfer took up a golf scholarship at the College of Charleston in August after a watershed 2021 season at home, where he backed up runner-up finishes in the SA Stroke Play and African Amateur Championships with four provincial top fives. The South African Golf Development Board graduate made an immediate impression at the Cougars, helping his team to tie for third in the Daniel Island Intercollegiate with a runner-up finish in only his fourth consecutive start.

“This was a dream week for me. With the countries qualifying following their standings in the previous World Amateur Team Championship, The Spirit really draws the cream of amateur golf in the world. I am incredibly grateful to GolfRSA for giving me the opportunity to make my debut for South Africa in such a prestigious tournament,” Van Wyk said.

“I was probably still a little overwhelmed on day one, because I didn’t play my own game, so I am proud of how I bounced back over the last two rounds. I felt like my approach shots were really key, setting up a few birdie chances which I was able to convert. Christo was amazing as a playing partner and we fed so well off each other, especially in the final round. This event was an invaluable learning experience for me. I have a few weeks left at college and then I look forward to using everything I’ve learned when I tee it up in the SA Open at the Gary Player Country Club in December.”

Williams and Macnab carded rounds of 147, 156 and 161 to tie for 15th with Finland in the Women’s Team Competition.

Williams, who came into the event after helping Florida State University to victory in the Inaugural Barbara Nicklaus Cup at the Muirfield Village Golf Club, placed 25th in the Women’s Individual Ladies Competition with rounds of 75, 73 and 82.

“It is always an honour to represent South Africa and even more so in an event of this stature,” said the Durbanville golfer. “It wasn’t the result I was hoping for, but just the opportunity to play at this level was huge. My counting 73 in the second round is something I’ll always remember. I’m proud of the way we kept fighting, especially on the back nine in the final round. There are definitely a lot of positives to take back to college.”

Coming off a strenuous rookie season at Texas Christian University, former No. 1 Macnab was the first to admit she wasn’t in top form. The two-time SA Women’s Amateur champion finished 32nd with rounds of 72, 83 and 79.

“It wasn’t the best week on the golf course, but it was an amazing experience, nonetheless,” Macnab said. “The golf course is really something special and the opportunity to compete against the best amateurs in the world was invaluable. Thank you to the organisers and the volunteers – everything was so well coordinated and presented. It was a privilege to represent South Africa again and this week will always rate among my golfing highlights.”

“I am super proud of Team South Africa, who were fantastic ambassadors for our country and GolfRSA, on and off the course,” Braude said. “The number of compliments and new fans of Team South Africa is a credit to Caitlyn, Christo, Kaylah and Kieron. 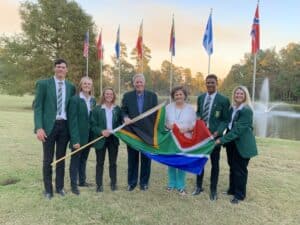 “Yes, there were some tough times, but everyone rallied and supported one another with every team member contributing over the 54 holes. Their tenacity and determination were tremendous, and this is recognised by the fact that, despite the change in format, the team improved by one position from the 2019 result to finish eighth overall.

“I have to tip my hat to the founder, Corby Robertson and The Spirit Golf Association, because this tournament really lived up to its billing. Every element of this championship was of the highest standard and incredibly well organised. Thank you to our hosts, the Whispering Pines green staff, Camp Olympia staff, Texas Golf Association, the volunteers, the team captains and the players for an exceptional and memorable week.”