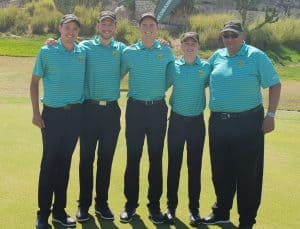 The GolfRSA National Squad quartet signed off with a clean sweep in the Match Play final round at Rossmund Desert Golf Club to celebrate a 23rd victory for South Africa’s in the prestigious event.

The South African team dominated the 54-hole Stroke Play seeding stage to set up a final round date with the host nation.

Ekurhuleni junior Schaper took the Individual honours on 10-under-par 210 with rounds of 71, 66 and 69, while Filippi finished second, Nienaber third and Nel placed fifth individually to top the seeding table with a team total of 629.

Filippi and Nel were sent in to bat first in the foursomes against Wentzel and Mather.

“We played really well, although we got off to a slow start with successive bogeys,” said Filippi from Western Province. “We started to dovetail really nicely and we were two-under through the turn. By the 13th hole we were 5-up and we wrapped up a 6 & 5 win.” 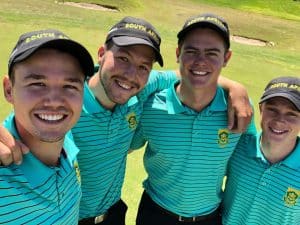 “I got off to a slow start,” said Schaper, who won his game 1-up. “I bogeyed the second, but I bounced back with a birdie at the third to square. Birdies at four and five kept the game square, but I let another one slip at the sixth hole.

“I birdied the eighth to stay 1-down, but started well on the back nine with a birdie to square again. We both birdied 12 and 13. I went 1-up with a birdie at the par five 15th and finished with pars for the win. It was a great match against Likius. It was tight from start to finish and I’m really pleased that I got the job done to help the team to a clean sweep.”

“I faced a few challenges, but overall I played really well,” said the Bloemfontein golfer after beating the Namibian 3 & 2.

“I was 1-up through four holes, and then I removed an out of bounds stake and lost the hole. I made some great putts to turn 2-up and eagled 10 after a great drive to go 3-up.

“This competition continues to improve and winning was not as easy as we would have wanted,” he said. “The opposition took us deep in the singles with Wilco winning on the 16th and Jayden on the 18th. It speaks volumes for Namibia’s fighting spirit.

“We are especially proud of Jayden having won individual honours in the stroke play seeding and credit to all four players for doing the country proud, both on and off the course, and for maintaining South Africa’s proud record. The team spirit among the boys this week has been very special and I believe they are well primed now for the GolfRSA National Squad Tour to Europe in May.

“Congratulations to Namibia on a fantastic contest and to Zambia, who won both singles games to beat Mauritius 2 & 1 for third overall.”

Written and released on behalf of GolfRSA.