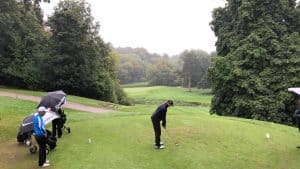 Wilco Nienaber in action during in the Eisenhower Trophy at the World Amateur Team Championship in Ireland; credit GolfRSA

MAYNOOTH, Ireland (6 September 2018) – Team South Africa suffered another setback on a wet and windy second day at the World Amateur Team Championship, but the spirit in the camp remains high and the team is determined to come out fighting in the final two rounds of the Eisenhower Trophy at Carton House Golf Club in Ireland.

Wilco Nienaber and Matt Saulez combined for a one-over 143 team total in the opening round at the challenging par-72 Montgomerie Course to tie for 30th.

Eager to improve their position at the birdie-yielding O’Meara Course in Thursday’s second round, disaster struck when Malcolm Mitchell – flown in on Wednesday to replace the injured Jovan Rebula – went down overnight with a stomach bug.

This meant the country’s top ranked pair were left to battle the elements alone.

Saulez once again led the team with a two-over par 75 and Nienaber posted 76 for a second round 151 that dropped South Africa to joint 45th with Saudi Arabia on four-over 294.

Meanwhile New Zealand set a championship record with a for the lowest second-round score to take the top spot on the tightly-packed leaderboard.

Daniel Hillier fired 65 and Denzel Ieremia 66 at the Montgomerie Course for a 13-under 131 to shoot the Kiwis to the top of the pile on 20-under-par 270. They lead by one stroke over Denmark, Thailand and host Ireland.

It will take some really special to get South Africa back in the chase but team manager Eden Thompson believes the team can pull a rabbit out of the hat.

“Hopefully that’s our share of woes; if not, we might have to hunt for four-leaf clovers tomorrow,” said GolfRSA Manager Golf Operations. “What happened with Malcolm was obviously upsetting and the mood in the camp was low.

“He woke up around 4am with severe nausea and began vomiting. We tried to get him care prior to tee off, but I withdrew him when he arrived at the tee still looking very green. We took him to the IGF medical offices and packed him off to bed. He was much better this afternoon and definitely wants to make a contribution on Friday.

“Matt and Wilco teed off in driving rain and wind and quite literally fought conditions all day. Not having the luxury of a third player had an effect on their game plans. The score board speaks for itself. We are far off our goal, but we had a good range session in the afternoon, and a productive team meeting about our approach for the rest of the tournament.

“What’s done, is done and we are taking a positive attitude to the course on Friday. The guys want to play themselves back into the tournament. It’s a big hill to climb, but mentally, the guys are optimistic and the energy is very positive.” 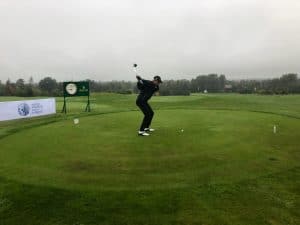 Matt Saulez in action during in the Eisenhower Trophy at the World Amateur Team Championship in Ireland; credit GolfRSA

Saulez turned two-over with a bogey at 14, double bogey at 16 and a birdie at 17, and cancelled two further drops on his back nine with an eagle at the par five fourth.

“It felt really good to get that ball in the hole at four,” said 21-year-old Saulez from KwaZulu-Natal. “I hit driver, 9-iron and holed a putt from about 20 feet.

“Not our best day, with really tough conditions this morning. I struggled to get into my rhythm, but some good work this afternoon left me feeling positive. We will be back firing tomorrow.”

Nienaber had a bogey start at 10 and dropped three more shots in his outward loop. The Free State golfer rallied with birdies at four and six, before giving another shot back to the field at seven.

“Every time I hit it in the rough, I got a flier and paid the price,” said the 18-year-old GolfRSA National Squad player.

“I battled with distances and never really gave myself any chances on the front nine. The back nine went better and I feel more in control after our session this afternoon. Hopefully I can convert it into a red number on Friday.”